We all know the feeling. It’s Monday; it’s just you, your wrist wraps, the bench, the bar, and the plates. So, how much ya bench, bro?

Sorry, I tried to resist, but I just couldn’t. Though the bench press is ever popular among gym-goers worldwide, of the three powerlifts, I would argue that it has by far the most complicated set of rules. There are a wide variety of ways to get your bench press turned down by the judges. Let’s take a closer look to make sure you get three white lights at your next meet. 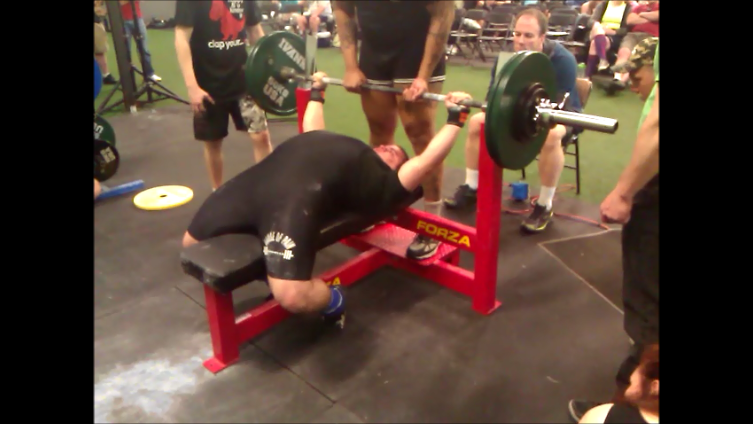 Bench Press at a Meet

We’re going to start with an overview of what happens when you bench at a meet. Then, we’ll work our way down to the specific details piece by piece.

Like the squat, the bench begins when the announcer lets you know: a) you’re up and b) the bar is loaded. As soon as he calls, “the bar is loaded”, you have one minute to get set-up and begin the lift. 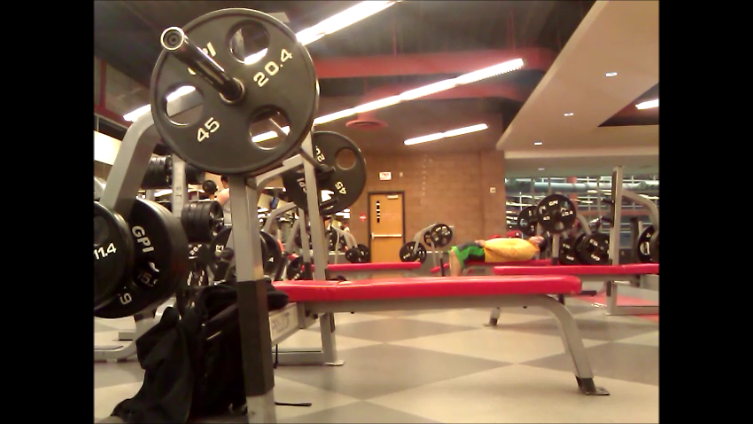 “The Bar is Loaded!”

You’ll start your set-up by laying down on the bench and unracking the bar. You’re allowed to use a spotter to help on the lift off. However, before you begin actually lowering the bar, you must wait for the “Start!” command. 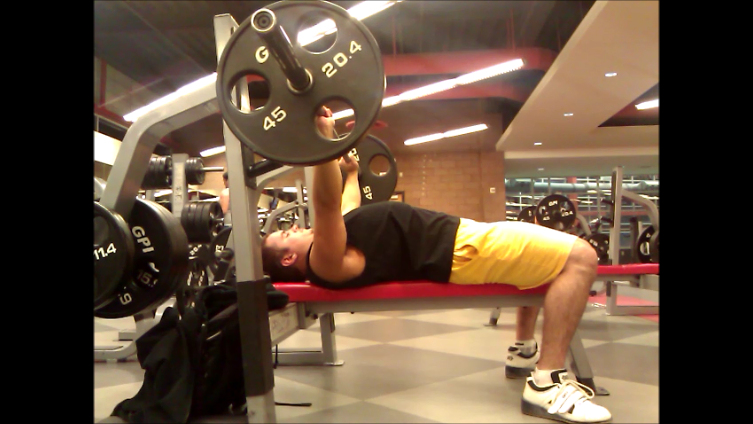 Once you’ve received the command, lower the bar all the way down to your body. It may touch any part of the body so long as you avoid contact with the belt. If you do not touch your body, you’ve already failed the lift. When the bar is in contact with body, hold it there motionless and wait for the second command, “Press”! 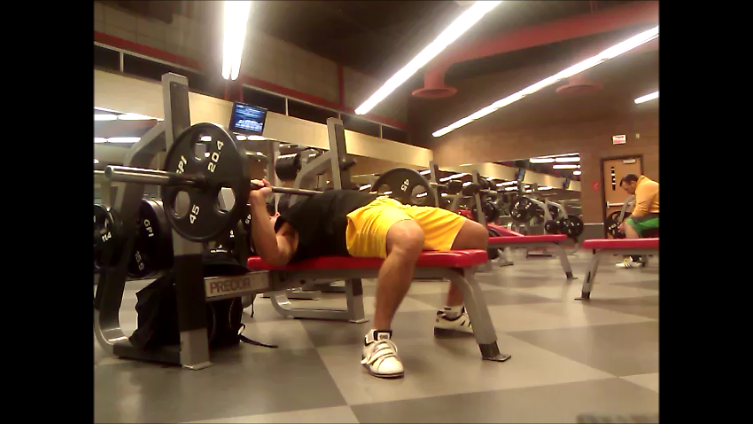 Once you’ve received the press command, drive the bar back up to lockout. Ensure that your elbows are fully extended. Now wait. Before you can return the bar to the rack, you must receive the third and final command — “Rack”! 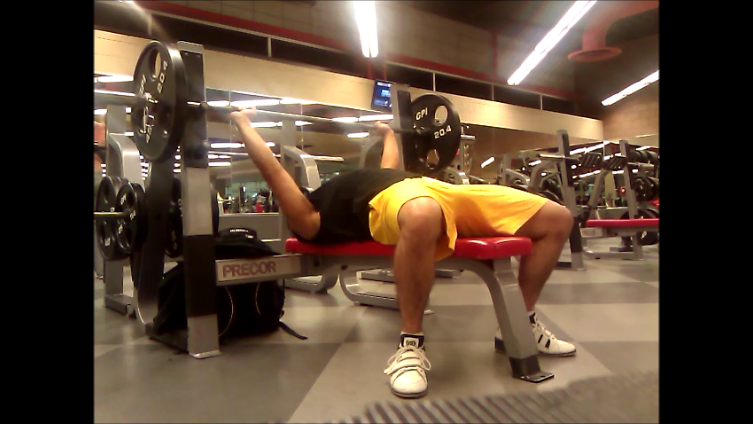 After the “Rack!” Command

If you’d like to see a video of this whole process, including an example from a real meet, there will be one at the end of this article.

I’d like to make a couple of important notations here. Many federations do not employ the start command. Some do not even employ the rack command. However, you will ALWAYS be faced with the press command. Again, it is critical that you familiarize yourself with your own federation’s rules.

Now that you know the general gist of how the benching process works at a meet, you should be aware that the bench press rules begin well before any weight ever gets lifted. Before the judges can begin evaluating whether or not a given press is legal, they ensure the lifter establishes four important points of contact: 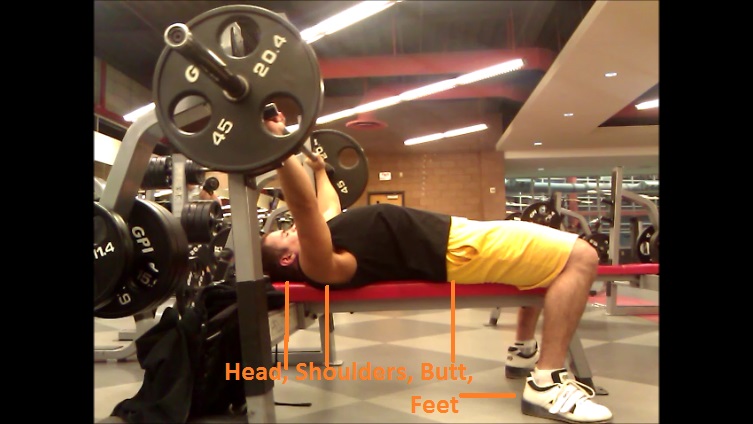 If you do not satisfy any one of these conditions, your lift is automatically disqualified.

Again, there are a few important considerations and exceptions that we must point out with regards to some of the rules:

In some powerlifting federations, the grip requirements are fairly stringent. At their most strict, here is the rule set: 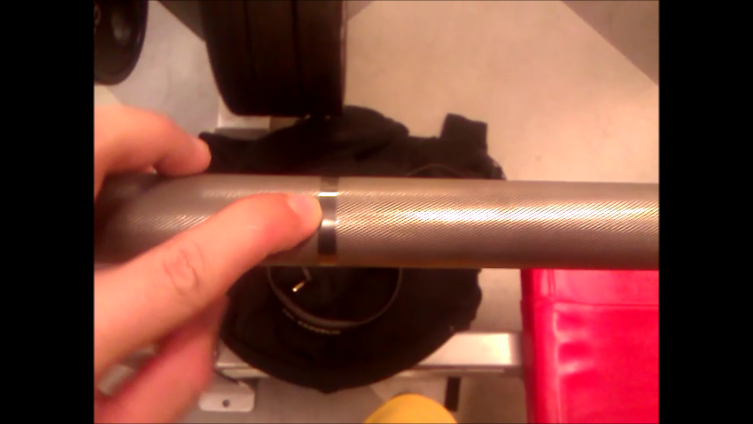 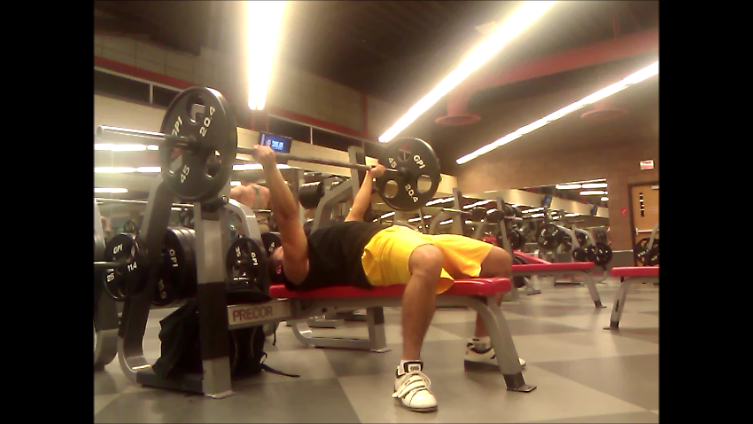 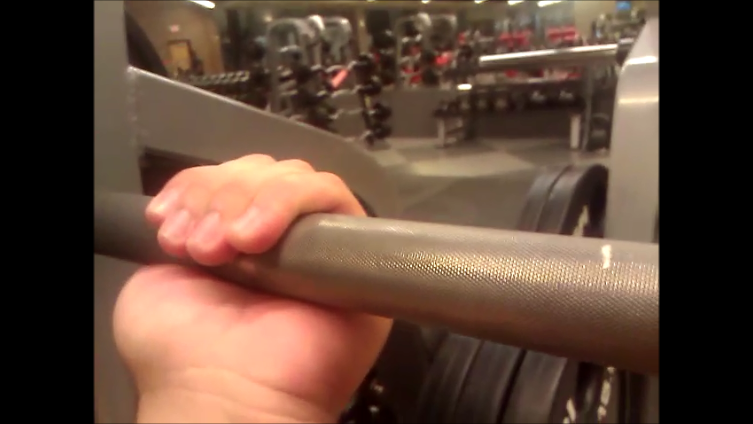 As I said at the beginning, the bench press rules are comparatively complex. Here are all the ways you can disqualify your bench press attempt:

iii) This leads us to “Sinking” and “Heaving”. First of all, sinking the bar into your chest is completely legal. 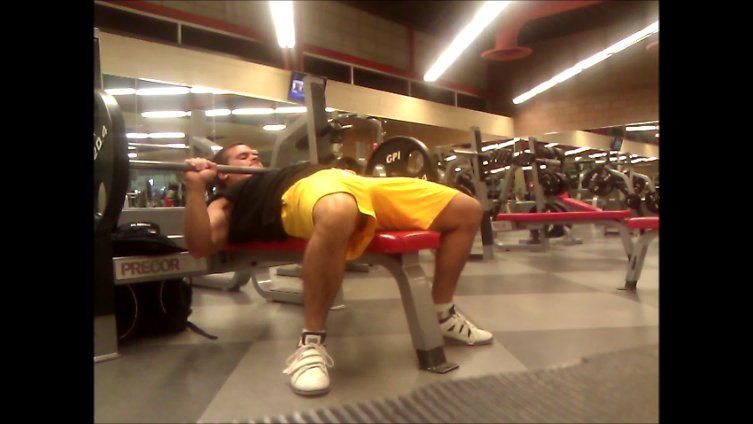 Note the bar has sunken into the chest.

As long as at some point the bar stops moving, there is no true rule against sinking. However, “heaving” is a different story entirely. Heaving is when a lifter sinks the bar after being given the press command. Remember, any downward motion is already illegal. On top of breaking that rule, the lifter is also defeating the whole purpose of the pause. By letting the bar sink further after the press command, the lifter is able to generate a rebound off of his chest muscles and rib cage via both the stretch reflex and compression of the actual tissues there. As such, heaving is never allowed in any federation.

For an example of heaving, see the video at the end of this article.

In Powerlifting, we often talk about the “paused” bench versus a “touch and go” bench. A touch and go bench is simply a rep where the lifter lowers the bar to their chest and raises the bar back up without any pause at all. They aren’t bouncing the bar off their chest like a guy doing the 225 test for the NFL Combine, but there isn’t ever a point where the bar is motionless, either. There is no federation that I’m aware of that allows the use of a touch and go bench.

However, many of the most prominent federations don’t actually say anything about a “pause” in their rulebook.

From the IPF Rulebook:

…the lifter must lower the bar to the chest or abdominal area (the bar shall not touch the belt), hold it motionless, after which the Chief referee will signal the audible command “Press”…

From the USPA Rulebook:

From the SPF Rulebook:

From the UPA Rulebook:

…the lifter shall lower the bar to the chest/belly and await the head referees’ signal…The signal shall be an audible command “Press” and given as soon as the bar is motionless on the chest.

If the bar only has to be motionless, well, that can be interpreted as saying that the judge should give the press command as soon as he sees the bar stop moving. This is very different than a rule languaged in such a way that a “clear and definite pause” is necessary. The former allows room for an interpretation where the lifter is given a very quick command. The latter begs the question of what exactly constitutes a “definite” pause? Is it half a second? One second? Two seconds?

Still, be cognizant of how the “pause” is judged in your federation. It might not require a literal pause at all.

If you’d like to hear my take on the politics of the situation and which rule I feel is superior, watch this video:

Bringing it All Together

Like I said, the bench press is easily the most technically complex powerlift in terms of the rules. And, honestly, text is somewhat of a poor format to convey the rules of a sport. If you’re having trouble remembering all of the bench rules, if you prefer to watch rather than read, or if you’d like to see a real world, bench press at a powerlifting meet, please watch the following video: