The squat is the first lift performed at every single powerlifting meet. The squat itself isn’t too complicated; you strap on your powerlifting belt, you squat down with a heavy weight and then you stand back up. The rules don’t have to be too complicated, either. Let’s make sure your squats count.

This article isn’t about technique, but if you’re trying to figure out how to optimize your squat leverages, check out the technique series.

As a brief aside, I need to note that, during any lift, competitors are overseen by three judges. It is each of these judges’ job to pay close attention to whether or not the lifter complies with the rules of the event. If a given judge believes that you have, he will flip a switch awarding you a “white” light; or, if he believes you have not, you’ll receive a “red” light. So long as you get at least two white lights, your lift will count. 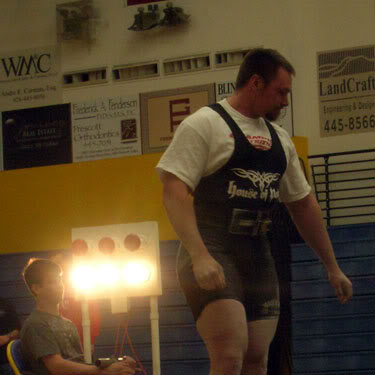 First, the announcer will let you know that you’re up. Your “turn” officially starts when the announcer calls out, “the bar is loaded”. You have exactly one minute from the time this announcement is made to set-up and unrack the bar. If you fail to do this in under a minute, you forfeit your attempt.

After you unrack the bar, you need to set-up to squat. For those of you squatting out of stands, you’ll have to walk it out. For monolift users, you’re good to go as soon as the spotters clear the hooks. When you’re all set-up and ready to squat, make sure you stand straight up and fully lock your knees out. Once you’ve done this, make eye contact with the head referee. He will then give you the “Squat!” command which is analogous to a “start” signal, but you can begin the actual movement at your own leisure. Be warned, you will not receive the squat command if your knees aren’t fully locked or if you aren’t standing straight up.

After you’ve received the squat command, you need to squat down until your hip joint drops below your knee joint. After you’ve hit depth, squat the weight back up. Make eye contact with the head referee again and wait until he gives you the, “Rack!” command. Once you get the command, you’re allowed to return the bar to the rack.

For a real world example of this whole process, see the video at the end of the section, “Technical Rules”.

Not reaching legal depth is by far the most common technical reason that lifters fail squats. Nearly every federation’s rulebook contains approximately the same rule. Here is the definition of depth from the IPF Rulebook:

“…the lifter must bend the knees and lower the body until the top surface of the legs at the hip joint is lower than the top of the knees.”

In simple terms, this means the lifter must squat down until their hip joint is lower than their knee joint. 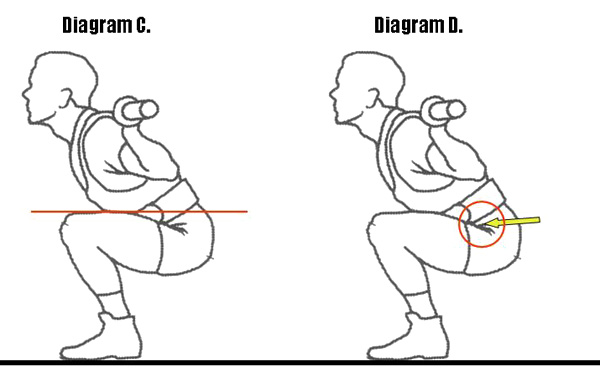 Legal squat depth as per the USAPL Rulebook (IPF Affiliate).

Unfortunately, depth standards are not universal. Some federations have a reputation for over-enforcing the rule and others are notorious for the exact opposite reason. If you’d like a video example of legal depth, or if you’d like to hear a bit more about the politics of squat depth in powerlifting, I highly recommend that you watch this video:

You can fail the squat for a variety of reasons:

Watch this video for some real world examples of each of the above rules:

There are also a few equipment considerations. Your knee sleeves, or knee wraps, may not touch your singlet or the lift will not count. You must have the straps of your singlet up when you step onto the platform. I almost lost a squat opener because of this rule. Luckily, I walked away with only a warning. Remember, your shoe heels can’t be taller than two inches. Refer to Part II for more on powerlifting shoes. 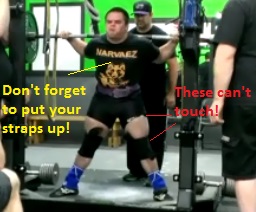