If you consider yourself a student of the game, and you’ve liked the series thus far, I strongly recommend you pick up a copy of ProgrammingToWin

. In my opinion, this is the single BEST introductory book to the principles of proper programming out there. The book is thorough and yet, simultaneously, readable for the average novice. I promise you won’t regret investing in ProgrammingToWin.

Moving right along in the Powerlifting Programs series, we’re going to take a crack at Boris Sheiko’s Six Week Novice routine. As I’ve said at the beginning of other pieces in this series, if you haven’t seen the first few foundational articles, you need to check those out now. Without reading them, you won’t have context for the rest of the video. 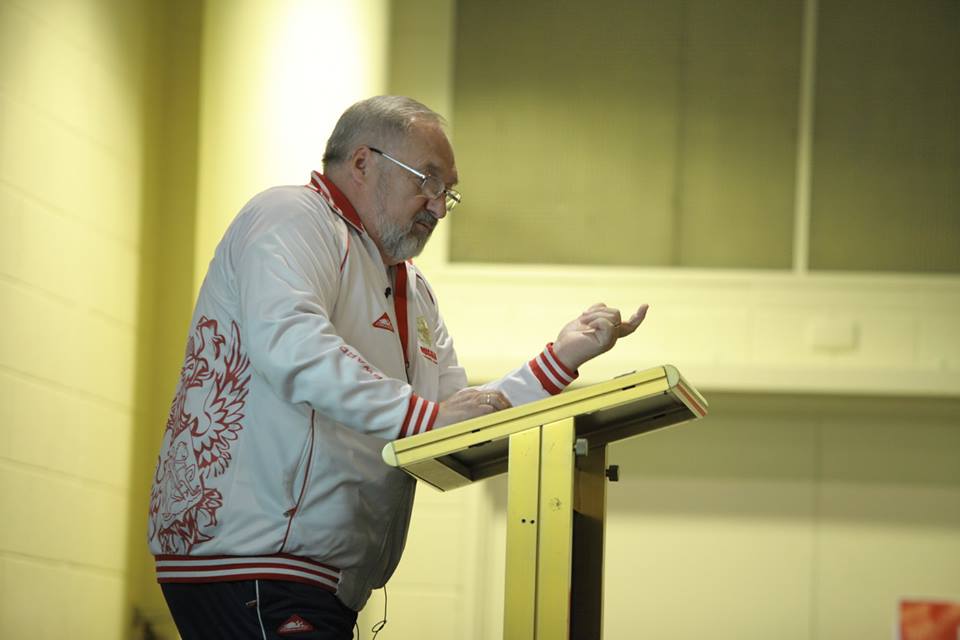 Unlike a lot of the other programs we’ve looked at thus far, this one was developed specifically by a powerlifting coach. And not just any powerlifting coach, Boris Sheiko has helped produce many champions and all-time world record holders such as Andrey Belyaev, Konstantin Pozdeev, Kirill Sarychev, Alexey Sivokan, and many more!

Before I launch into the program which is actually quite complex, I’d like to give some background on Sheiko’s thoughts about novices in general. For Sheiko, the novices he generally deals with are ~13-15 years old. In Russia, powerlifters are set down their chosen path much earlier than typically happens in the U.S.A. The choice of sports is very deliberate.

As such, the entire program is written from the perspective that a coach will be handling groups of 13-15 year olds specifically interested in powerlifting. In Sheiko’s opinion, technical development and general physical preparation are the primary objectives of this most early phase of training.

You’ll start to understand when you see the actual program:

I know this is a lot to digest. Take your time looking over the program.

Now, I know this thing is a monster so rather than ripping the whole thing apart piece by piece, I want to point out what I consider a few key attributes of the program.

You’ll notice that Mondays and Fridays are dedicated primarily to benching and squatting. After squatting and benching, or doing close variants thereof, the novice then does 3-4 general physical preparation exercises (GPP). Sheiko even has the novices playing sports on Fridays! In fact, most of the program volume comes from these GPP exercises which are highly varied from session to session.

Wednesdays are dedicated to the deadlift, or a close deadlift variant, and some sort of bench variant which emphasizes the shoulders (for the most part). Incline and overhead are both used in this “middle of the week” pressing slot at different points.

All of the movements are specifically selected for their GPP and technical properties. Sheiko is intending here to increase the novice’s coordination and overall athletic ability by forcing them to do lots of lunges, kettlebell squats, pushups, some pullups, and a variety of other GPP work. Box squats and rack pulls are featured heavily primarily because, according to Sheiko, box squats teach the novice to squat more effectively than free squats and rack pulls are safer. Interesting.

Now, let’s get to the nuts and bolts.

As with all other novice plans, Sheiko’s novice routine doesn’t end in a competitive peak. In fact, the volume slowly grows over the six weeks reaching its highest point in Week Six.

Like with the other novice programs we’ve looked at, this one is not “periodized” in the sense that there are specific phases dedicated to strength, technical development, and hypertrophy. However, unlike other programs we’ve looked at, probably because of the age range, the entire program focuses fairly explicitly on technical development and general physical preparation. This is a markedly different approach from typical American novice programs.

Clearly, the programming of Sheiko’s novice routine is unlike anything we’ve examined thus far. Not only is every single training session different in terms of sets, reps, and exercise selection, but each session has different volumes as well. Not only that, but the program progressively adds volume as the weeks go by.

This is not the “simple” approach used by American programs. The variation in workload is intended to accustom novice lifters to Sheiko’s intermediate routines which are organized very similarly. So, unlike American programs, developing volume tolerance is one of the objectives with this novice program. That is why volume slowly tapers up over the weeks. In order to survive later Sheiko programming, you need to build a very strong base of work capacity.

The program is purposefully fairly general in exercise selection. More than half of the movements are GPP exercises. However, the core exercises are always specific or general-specific movements. For example, a closegrip bench is not entirely specific to powerlifting, but it is still fairly specific to the bench press because it is a close variant. An overhead press would be less specific still and a squat wouldn’t be specific to the bench at all.

Let’s dig into this further. On the one hand, unlike virtually all of its American counterparts, the program features virtually no “upperback” work and very little overhead pressing. The main exercises selected are the powerlifts and their close variants. You’re looking at squats, box squats, bench presses of different grip widths, and deadlifts from different rack heights.

On the other hand, the majority of the movements are not the actual powerlifts themselves. In nearly every workout, 4-5 of the 5-6 exercises are general-specific or general in nature. Generally speaking, Sheiko did this to make the routine easier for novices to learn. A rack pull is easier to teach than a deadlift from the floor. A box squat is easier to do correctly than a full free squat. However, the tradeoff is that the novice has much less opportunity to learn to do the actual movements correctly.

In my opinion, if technical development is the focus, you’re much better off performing the actual competitive movements. Not only that, but you need to perform them in relatively higher frequencies. Sheiko’s program, for the most part, features twice weekly squatting, once weekly deadlifting, and thrice weekly benching. This is honestly just fine for a novice in my opinion; however, because so many variants are used, the novice only gets the opportunity to do real free squats eight times in a six week cycle. This isn’t specific enough to be optimal by my judgment.

Overload is actually managed through regulation on this program. The coach prescribes a minimum weight for each novice lifter, observes their technique, and then adjusts the weight upward if it is too easy for them. Because of the presence of a coach, novices progress at their own pace. They are not limited to a fixed, linear increment.

This leads us right into individual differences. Everyone progresses at different rates, but novices have more variety than any other group.

Linear progression is a bit of a farce. Genetic potential for strength exists along a strength curve. Your gains decrease at an increasing rate. 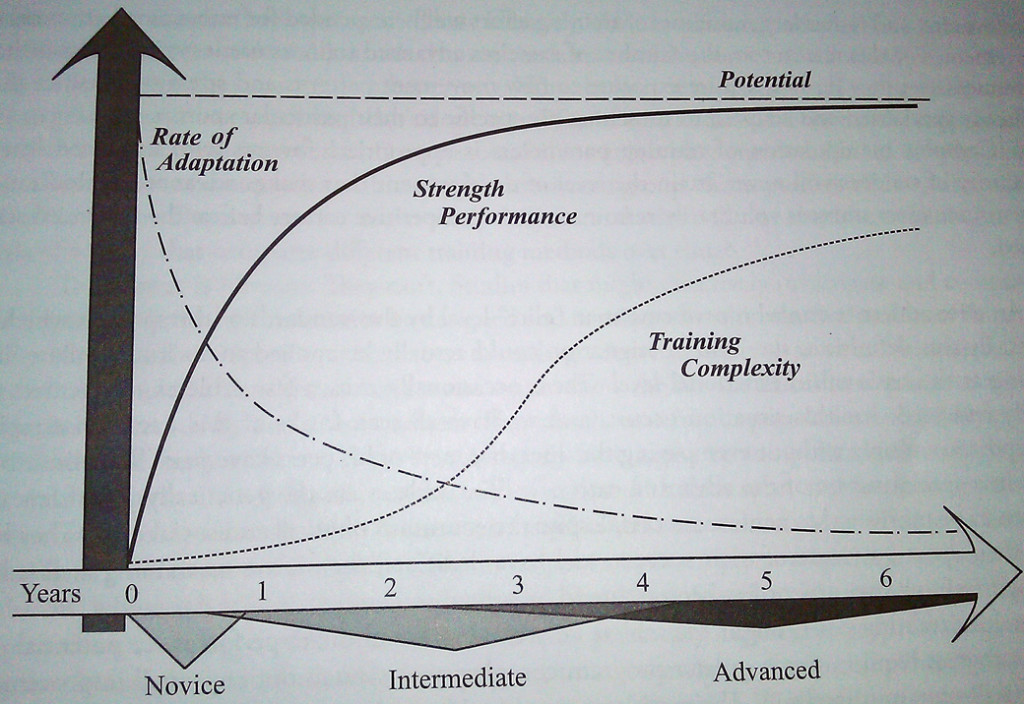 When we use linear progression, we’re trying to force-fit a straight line onto a “curved” data set. This still works well for the most part because it allows some wiggle room in the beginning. However, towards the end of linear progress, it becomes unsustainable.

Sheiko’s program, by using a coach, cuts out this forced linear curve fitting. This is going to enhance the speed of the results that any novice gets. This is obviously superior, but there is just one huge problem: most novices don’t have a coach watching their every set. This program doesn’t work without the coach in place.

As mentioned earlier, this program offers variety in intensity and volume right from the very beginning. Each session has a markedly different workload. This is in stark contrast to StrongLifts or Starting Strength where you do the same thing every single workout. Sheiko applies intermediate fatigue management concepts even to his novices.

When you look at the volumes they do, it isn’t any wonder. These volumes are absolutely enormous relative to what you’ll see in any American beginner’s program. In fact, it isn’t an exaggeration to say that if the three primary goals of the typical American novice programs are strength, hypertrophy and technical development, Sheiko’s novice program goals are technical development, general physical preparation, and increased work capacity (volume tolerance).

It is my opinion that these volumes are much too high and really just unnecessary. Sheiko uses them because all of his routines feature supremely high volumes. As you move along the Sheiko continuum of training advancement, from novice to rated lifter to master of sport, you’re constantly making big jumps in frequency and volume. In order to set up a foundation that will allow for this in the future, Sheiko pushes his novices really hard in terms of work capacity.

It makes sense, but it is ultimately unnecessary in my opinion. Work capacity can be developed over time as volume increases more gradually. In this manner, one doesn’t need to resort to super high volumes in the very beginning of their training career. The higher volume stages are saved for later when they become absolutely necessary for further progress.

I cannot recommend this program for novices simply because you cannot run this program without a coach. The overload method requires a coach to regulate your weights for you. However, it will be instructive as we move along in this series to note that there are other options besides linear progression for novices and, in fact, they make more sense and work better.

My specific criticisms of this program boil down to:
A) Lack of overall specificity – too much exercise variety; not enough competition lifts
B) Unnecessary volumes – novices simply do not need this much volume; Starting Strength proves it

That said, I chose to review this program because of the unique attributes it possesses in comparison to typical American novice programs.

Namely, Sheiko feels that GPP is incredibly important for novices and, in fact, more than half of the programs exercises are GPP movements. Increasing GPP in the novice serves many important functions: increased work capacity, improved intra/intermuscle coordination, variety and fun, general hypertrophy, and general overall movement competency. Hell, keep in mind that Sheiko has these kids playing sports games every week!

Additionally, I wanted to demonstrate that not every powerlifting coach believes in massive amounts of upperback and overhead pressing work. These additions are taken for granted by most of the American programs which typically feature a 1:1 press:bench ratio and lots of barbell rows or chin-ups. Sheiko just has his novices bench three times a week instead AND uses all that upperback volume on more deadlifting. I feel these aspects of the program represent an upgrade to the typical American approach.

So, again, I cannot recommend that you go out and actually try to do this program as a novice. It does require a coach. However, I hope that our analysis has been instructive and expanded your horizons on what appropriate novice programming entails. When I eventually release my novice program, you’ll notice that I drew many elements of the structure from Sheiko’s ideas.

I know many of you are anxious for us to get into the intermediate programs, but there are a few beginner requests that I still need to work through first. As such, we’re going to take a look at GreySkull linear progression.