So… we’ve arrived at Brandon Lilly’s The Cube Method

If you’re interested in doing the Cube Method, you’ll probably want to snag a copy of 365 Strong for reference material. That said, the eBook is only 69 pages long and more than half of it centers around Brandon Lilly’s philosophies about life rather than the actual Cube Method. I don’t think you’re getting good value for your purchase, but, at the same time, it is hard to stay true to a program without having the book. I am personally neither a fan of the method nor the book. I can’t recommend either in good conscience. Buy at your own discretion.

Let’s get into why I am not necessarily a fan of the Cube Method.

Unlike so many of the other programs that we’ve reviewed thus far, Brandon Lilly actually designed The Cube Method

In response, Brandon, in his own words, “returned to his roots”. He did this by designing a program that centered on compound barbell movements minus all the bands and chains. He simplified everything. If you look closely though, the Westside influences are still a major part of the program.

Let’s take a deeper look into The Cube Method 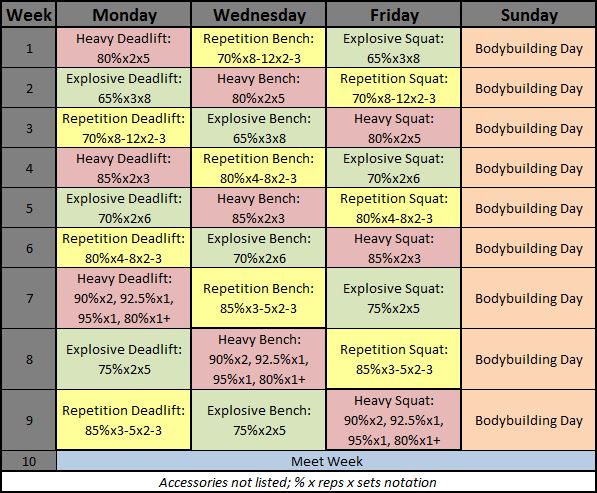 As you can see, the Cube Method is not the most straight forward program. In terms of basic structure, you have one day per week dedicated to each of the powerlifts. A fourth training day is added where you employ bodybuilding style movements to address muscular weaknesses.

The program is run in three week waves. Each week, you rotate the type of work you do on each of the main movements. In Week One, you might do speed work for the squat. In Week Two, you might do rep work. In Week Three, you’d finish off with heavy work. During each training week, each lift is trained in a different style. That is, you never go heavy on two movements in the same week nor do you ever do speed work on two main movements in the same week. Everything is rotated and waved throughout the three week cycles.

If you’re looking for a Cube Method calculator, BlackIronBeast is your best bet.

Because the Cube Method is an actual powerlifting program, it is designed as a 10 week cycle. Every ten weeks, you’re supposed to compete and/or do a gym mock meet to test your new 1RMs. As such, the program is structured around peaking in the 10th week. The last three week wave features less overall volume and heavier overall weights to accommodate this fact.

The peaking plan for meet week is brutally simple.

As you can see, you basically just fully deload in the last week with a few light sessions before the meet. This isn’t a sophisticated peak, but it will work well enough for most.

However, the program does not periodize all exercises with a focus on the same physical quality simultaneously. Just as an example, if you’re doing a max strength bench week, you’re doing a hypertrophy squat week, and a speed-strength deadlift week. So while each individual lift is periodized, in reality, the totality of the training employs concurrent periodization where all physical qualities are developed simultaneously.

The overall programmatic structure of The Cube is typical of old school American powerlifting programs. Each lift is featured once per week. Due to the fact that a different quality is trained for each lift during each week, you also get substantial variation in intensity and volume from session to session.

In fact, per lift, you also get substantial variation in volume and intensity from week to week. Each mesocycle in the program contains three weeks and they’re all substantially different from each other in terms of loading and volume for each lift. Because of this, The Cube can be used profitably even by advanced athletes. At the same time, late stage intermediates can still get a lot out of the program because of the concurrent periodization aspects contained in the assistance and due to the rotation of qualities trained throughout the week.

The one thing you can’t criticize The Cube Method

for is specificity. This program is thoroughly aimed at powerlifting. The entire program is structured around the Big Three and the vast majority of assistance comes through closely related movements such as block pulls, deficit pulls, closegrip bench, Olympic squats, and other similar variations.

The one knock I would give the program in terms of specificity is that, in my opinion, a bit too much of the overall volume of the program comes from the assistance rather than coming from doing work on the competition lifts.

The Cube Method is a percentage based program. That is, you need to know your maxes in order to run the program properly. After each training cycle, a new max is taken and your next training cycle is calculated based on this number.

After each three week wave of The Cube, the %s on all main exercises is increased by 5% (the only exception is Rep Day in Wave 2 is increased 10%). This is progressive overload. The lifter is progressively taken from slightly more volume at lighter percentages to heavier weights at slightly lower volumes.

The program goes to pain-staking lengths to ensure program recovery. I doubt very many people will have trouble recovering on this program. You perform each lift only once per week and, each week, you only go heavy on one movement. You’re never killing yourself on everything at the same time.

In fact, I’d go as far as to say this program does too much in the way of recovery. For most unenhanced lifters, routines like The Cube don’t work optimally. They generally need much more frequency than hitting a lift one time per week. They generally need more volume than can be done in a single session. They cannot rely as much on anabolism to drive progress. They have to put in more work. I just don’t think The Cube contains enough overall volume nor do I think doing each lift once per week is optimal.

While Lilly goes out of his way to mention that you should increase the weights if they feel light and decrease them if they feel too heavy, this is the standard, unteachable “listen to your body” advice. There is no way to uniformly or systematically apply autoregulation to Lilly’s program even though he suggests that you do. Essentially, this just means that more experienced lifters will use that experience to autoregulate and less experienced lifters will ignore autoregulation and suffer the consequences. The saving grace is that at least the rep days have rep ranges so there is SOME built-in autoregulation.

This is why I’m such a huge fan of Mike Tuchscherer’s Reactive Training Systems. As far as I know, it is still the only program that actually systemizes and teaches you HOW to autoregulate. “Listen to your body” is nebulous advice that the vast majority of trainees simply cannot apply.

So, while the Cube DOES include aspects of autoregulation, they aren’t systemized. You have to figure it out for yourself. This causes the program to rate as good, but not great on this quality.

I am sure some of you are somewhat confused as to why I said I don’t like the Cube Method. Most of the things I’ve said in this review are fairly positive. Yes, that’s true. Remember, when we evaluate programs, we’re looking at things from a “good, better, best” perspective.

is a fundamentally sound program. Generally speaking, it covers all the bases. However, my personal biases run amuck here. I just don’t believe in once per week frequency on the main lifts. I just don’t believe in getting the vast majority of your volume from assistance lifts. I think technical mastery requires more weekly exposures to each movement and I think that maximizing specificity mandates that a large chunk of your volume should come from the actual competition movements.

Overall, you’re definitely not going to go wrong with the Cube Method. I’d be surprised if you didn’t make progress on it actually. I just don’t think it is optimal, though.

Next, we’re going to tackle a juggernaut… The Juggernaut Method that is! I’ve received a lot of requests to review this program. I am ashamed to admit that I don’t even know what the program is; I’ve never looked into it. I am excited to do some research and see what I find. Hopefully this will be an as interesting of a review for you guys as it is for me.