One of the great questions that I was asked recently is how one should go about the process of trying to change to a new powerlifting technique. For example, maybe you want to shift from high bar squatting to low bar squatting or maybe you want to try out sumo deadlifting for a time. Now, this is a bit of a broad question, but I do think some general guidelines can be given. 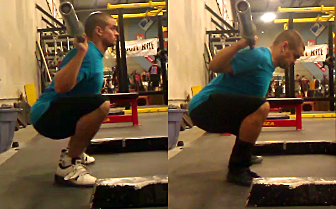 An exaggerated example of the high bar squat (left) vs. the low bar squat (right).

Let’s address the first scenario. If you try a new technique, and it is immediately stronger, thank your lucky stars! You’ve probably discovered something is simply more efficient in general and/or better suited to your particular biomechanics.

Typically, people like to reset a certain percentage, often 10% or so, whenever they’re trying a new technique. This is good advice. However, if the movement feels immediately natural, I recommend that you simply work up to a weight that is challenging but that still allows for proper form.

For example, the very first time I tried wide stance squats and wide grip benching with a back arch, I was able to set 20-25lbs PRs on sets of 5. I initially planned to work up only to a 90% of my previous PR set of 5. Once I started warming up though, it was clear that I was stronger using these methods and there was simply no reason for me to arbitrarily hold myself back when my form was holding up just fine.

Now, on the other hand, sometimes a new technique is going to feel incredibly awkward and difficult. You’ll basically try to use the old motor pattern despite the new technical changes and things just don’t click. The longer you’ve been lifting, generally speaking, the more likely this is to happen. The more ingrained a motor pattern, the harder it is to profitably change.

For example, it has taken me about a full year to progress my sumo deadlift to the point where it is stronger than my conventional pull. The first time I tried sumo, I was anywhere from 30-50lbs weaker than I was on the conventional version of the movement.

If this is the case for you, the standard advice to reset 10-20% is an absolute must because, first of all, you can’t lift as much and, second, because your form is likely bad when the movement feels “unnatural”.

If you don’t get those immediate results, don’t be disheartened. While it is true that many people try new techniques and never end up setting PRs with them, there are plenty of examples of people chipping away and eventually becoming stronger with their new style after a lot of hard work.

For example, take a look at my deadlifting history. In order for my sumo to pass my conventional deadlift, I had to do two full four month cycles of sumo only pulling to finally become stronger at the sumo style. During many of those periods, I wanted to quit, but, in the end, the diligence paid off. 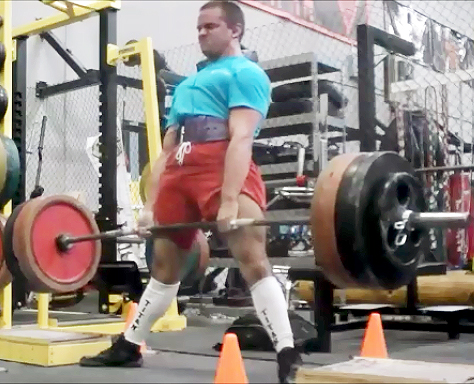 Full Commitment vs. “Easing” Into It

In my opinion, if you’re trying to make a true technique change, you need to give that new technique your full commitment for a full training cycle. If you just want to include some variation to act as accessory work for your main style, that’s totally fine. You may find that the new technique eventually becomes stronger even if you split time between both styles.

However, I’ve personally found it nearly impossible to learn a new movement pattern while still practicing an old one. You see, when you practice the old pattern, you are further ingraining that particular technique as your habitual method of performance. When you go to try the new technique, you’re going to find it harder not to use your cues, tricks, and tips from your old technique – things will blend together and, in general, you get the worst of both worlds.

Switching to a new technique can often be hard on its own. I don’t recommend making it harder by trying to “ease” into learning the movement. The more often you practice something, the more quickly you will become skilled at it. If you’re only squatting twice a week, just for example, and you’re doing using one session to learn low bar and in the other session you’re doing your usual high bar, you literally get half the practice of the person who just goes full bore on learning low bar. Your chances of a successful transition are lowered in my opinion.

As I said, I personally believe that you should dedicate a full training cycle to a new technique. You need to give yourself enough time to make progress and adjust to the new style.

The last thing you should ever do is try to make a major technical change right before a meet unless that technical change results in immediate progress above and beyond your old PRs. The risk is simply too high and you’re setting yourself up for a bad experience. If you have a bad meet experience with a new technique, you’re less likely to give it a legitimate chance in the future. As such, for competitive lifters, I’d only recommend trying to make a technical change when you are freshly into the off-season with no meets on the immediate horizon.

If you’re a relative novice, or you don’t have a meet scheduled for the foreseeable future, you can attempt to switch whenever you want. Novices, by definition, are constantly setting new PRs anyways. The only risk here is that you may disrupt a profitable PR run. If you are in the midst of a successful novice program, I’d recommend waiting until you still to try a new technique. Otherwise, as I said, switch whenever you want. If you don’t have any meets to mess up, the sooner you try to change, the sooner you’ll know if it works for you.

For far more information on powerlifting technique, I highly recommend checking out the PowerliftingToWin Technique Series.