Powerlifting is the sport of the squat, bench, and deadlift. Not only that, but powerlifting is the sport of doing a one-rep max on the squat, bench, and deadlift. There are no rep-sets on the powerlifting platform and there are no variations whatsoever. You do the competition lifts and nothing else. In the rest of this article, I’m going to explain why doing exercise variations besides the competition lifts for one-rep maxes aren’t strictly necessary for progress, but why you should include them nevertheless.

The principle of specific adaptations to imposed (SAID) demands dictates the response you get from training. Without getting too off track, this principle simply states that you get better what you repeatedly do; you don’t ride your bike to increase your squat. However, there is a huge continuum of specificity that people sometimes don’t fully grasp.

For example, almost all of us know someone, either in real life or Instagram, who can bench 225lbs/100kg (two plates, baby) for 20-30 reps. If you plug this performance into a one-rep max calculator, it translates into a 500lbs+/220kg+ bench press (five plates, baby). Yet, usually, someone who can do 20-30 reps at 225lbs is NOWHERE NEAR a 500lbs bench press. The reason for this is that even something as similar as high-rep sets WITH THE EXACT SAME LIFT does not have perfect transference to a one-rep max. In a sense, a 30 rep max on bench press is NOT the same exercise as a one-rep max bench press; it is an exercise variation. 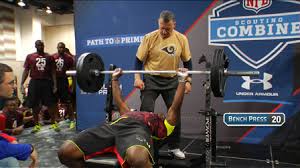 TONS of NFL Prospects crank out 20+ reps with 225lbs at the combine. These are NOT 500lbs+ benchers.

Okay, well, if we get reduced transference from higher rep sets, why don’t we just use a training style that consists of absolutely nothing but heavy singles?

The primary answer to this question comes down to muscle hypertrophy. In powerlifting, there is only so much you can improve your technique and your neural efficiency. At some point, in order to keep getting stronger, you must make your muscles grow to help you produce more force. Now, I’m not saying you should quit powerlifting and become a bodybuilder in order to lift more weights. At the end of the day, the SAID Principle dictates that you would get suboptimal results with such an approach because you’re not training the things that matter most to a powerlifter. However, the fact remains that you must get bigger over time to continue to make progress in this sport. 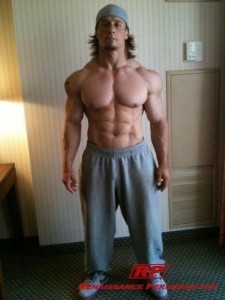 It is kind of obvious why Dan Green is so strong, isn’t it?

Based on relatively recent findings in the exercise science literature, we now know that relevant training volume (above 70% of 1RM OR high rep, high RPE sets) is the primary determinant of muscle hypertrophy. Very simply, the more you lift, the bigger you’ll grow.

One VERY important study, that I’ll be referencing throughout the rest of this article, was orchestrated by Brad Schoenfeld. Two groups of lifters were given training protocols that either featured three sets of eight reps or eight sets of three reps. The findings, you may ask? Well, muscle hypertrophy rates were approximately the same in both groups! However, the group doing sets of three got SIGNIFICANTLY stronger. This should be obvious considering what we said above: specificity is king when determining what adaptation to training that you receive.

Okay, so, now we’re just back to the idea that we should only do low-rep training, right? Well, not exactly. The 3×8 group finished their workout in less than twenty minutes, on average. The 8×3 group took longer than one hour. Even if you have no time limit, you’ll always be able to do more volume in the same time period with higher rep sets.

Injury, Burnout, and the Bulgarians

Before, I answer those questions, I’m going to back track and talk about the Bulgarian Weightlifting team. If you’re unfamiliar with their story or methods, I’ve written about them extensively here, but suffice it to say that this was a tiny country (relatively speaking) who managed to dominate the Olympics for more than a decade in the sport of weightlifting. The unique thing about the Bulgarians was their training style; they maxed out EVERY SINGLE DAY!!! 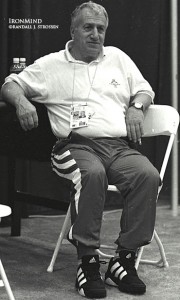 Coach Abadjiev — the godfather of the most successful weightlifting team in history: The Bulgarian Team.

Now, it is important to keep in mind that the Bulgarians were professional athletes. They had no job other than training, they trained multiple times per day, they lived in a training hall where professional cooks, masseuses and other staff took care of their every need, they were selected from the absolute most promising youth lifters, they were provided the highest quality performance enhancing drugs (such as steroids), and they had one of the best coaches on the planet. These are NOT the conditions you and I are working with.

Even with all of this going for them, the vast, vast majority of Bulgarian athletes got hurt, dropped out, or quit. It is impossible to give a percentage but just know that this process has become known as a “grinder system” for a reason. The athletes that survived became champions and the ones that didn’t, well, they didn’t matter. Communism, baby. 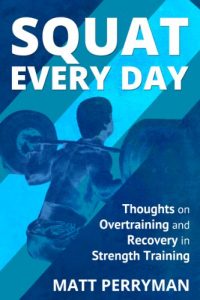 Learn how to train like a Bulgarian from Matt Perryman.

What does this have to do with any of us? Well, let’s return to the Schoenfeld study. At the study’s conclusion, they gave each group of lifters a survey. The group which performed three sets of eight felt energized, pain-free, and they wanted to do more and harder training. Now contrast that to the eight sets of three group where there were dropouts due to injury, complaints of pain, and a general desire to quit using the given training protocol.

Why We Use Variations

The Bulgarians have shown us that exercise variation isn’t strictly necessary. However, we also know that we can’t afford to be hurt, burnt out, and generally wanting to do anything else ALL the time. Including variety and higher rep sets can SIGNIFICANTLY reduce your risk of injury, keep you motivated, and all of this can happen while still retaining a high degree of specificity in your training.

Keep in mind that throughout this article I haven’t even mentioned other potential reasons for including variety: psychological relief (aka fun), potentially getting better gains from novel stimuli (doing something “new” that you haven’t done before), attacking “weak points”, or even doing extended range-of-motion movements to get superior hypertrophic stimuli (think DB bench going below chest level with each handle).

What I want you to walk away from this article knowing is the following: you do NOT need to include variety for variety’s sake. Just because everyone else has tons of variety doesn’t mean it is necessary or even productive. If you’re using variations in rep scheme, exercise selection, or whatever else, make sure you have a legitimate REASON for including variety. Don’t do it just because everyone else does. If you consider program design from this paradigm many common programming questions will answer themselves.