There is nothing more demotivating to the powerlifter than the persistent feeling that they aren’t making progress and there is nothing more destructive to your literal progress than getting hurt. An injury that is serious enough in nature can potentially prevent you from being able to train one, or more, of the lifts. If you participate in the sport of powerlifting for long enough, it is a near certainty that you will get hurt at some point. Some people will argue with me on that one, but that has been my experience over the last ten years of lifting weights. As such, it is critical that you have a mental game plan for dealing with these unfortunate, inevitable, temporary inconveniences that we call injuries.


Shift Your Mindset From Progress to Recovery

As I mentioned in the opening line of this article, most powerlifters FEED off of progress. We all want to lift heavier weights, right? That’s why we do this. When you get hurt, depending on the injury, it becomes PHYSICALLY IMPOSSIBLE to progress on one or more of the lifts. As such, you need to make an immediate mindset switch from worrying about progression to worrying about recovery. After all, the sooner you recover, the sooner you’ll get back to making progress. They’re one and the same thing even if they don’t seem like it. 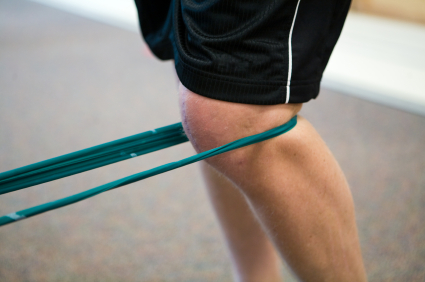 I know this type of thing sucks, but you must take it seriously. credit: pilatesfirst.com.au

Let me be more specific though. When you’re trying to make progress towards new PR lifts, you’re going to want to track your nutrition, keep a workout log, make sure you’re getting enough sleep every night and generally be aware of all the variables that contribute towards that next PR. You have to attack your rehab with the same intensity and vigor. Track your rehab workouts, do your mobility, rest appropriately, and make sure you’re checking off all the boxes on your list of rehab next-steps. You would never haphazardly and lazily go through training so DON’T make the mistake of doing that with your rehab. This will only further contribute to the sense of lost purpose in your training. Taking your rehab just as seriously as regular training will fix the vast majority of your positivity issues while training.

When I partially tore my adductor tendon, I was literally not even capable of doing bodyweight squats. I couldn’t even spread my legs, actually. In fact, walking long distances would eventually become painful. That was my starting point.

When I did my first pain-free bodyweight squat, I tracked it and wrote it down as a PR. Does that sound a bit corny and ridiculous? I’ll admit that it is, but so what? It made me feel like I was progressing in my recovery and that allowed me to start building back my belief that it was only a matter of time until I was crushing real PRs again. What do you think I did when I finally got back to a 135lbs/60kg squat for reps? I called it a PR, of course. Nevermind that I could do that weight from the very first day I tried squatting and it wasn’t a “real PR”; that doesn’t matter because it was a RECOVERY PR. You have to make that mindset shift. Reward and congratulate yourself on the minor victories. The more serious the injury is, the longer the recovery timeline is, the more important it is that you revel in each and every single small victory. They will be hard-earned and the path will be long and dark if you don’t ACTIVELY and PURPOSELY create small victories along the way.

Focus on What You CAN Do

When you get hurt in powerlifting, it is very rare that the injury will completely stop you from doing all three lifts. More often than not, an injury will only affect one lift. Sometimes, a lowerbody injury will prevent both squatting and deadlifting. Either way, it doesn’t matter, focus on what you CAN do. So you hurt your lowerbody and can’t squat? Focus on becoming a bench king. You’ll now have more recovery resources to dedicate to a more hardcore bench routine.

Tore a bicep? Smash out Safety Bar Squats. I had a friend do exactly that and he was able to set PRs on squat and deadlift as soon as he received clearance to train. This was no beginner, either. We’re talking someone who had a 700+ squat and deadlift.

When Dan Green tore his quadricep tendon, he worked all the way up to a 545 feet-up bench press! He eventually went on to set ALL-TIME personal records for his bench press during this period. This is a world record holder caliber lifter. If he can make gains to one of his lifts while injured so can you.

Again, instead of allowing your attention to drift towards what you CAN’T do focus on what you CAN do. There are almost certainly at least a few exercises that you can go all in on while your injury is healing. This will allow you to still set some type of PRs on at least a few lifts even if you won’t be setting any for a long time on a few others. In life and in training, there will always be plenty of negatives to focus on. You just have to make a decision to lock onto the positive things instead. This is a conscious choice. Make it.

Dealing with injuries is an absolute mind game. I know that; I understand your pain. However, above all else, you just need to make a conscious decision that you’re not going to let the injury beat you no matter what. Countless champion athletes throughout the annals of history have made comebacks from horrific injuries. There is no reason you can’t do the same (especially if your injury isn’t even horrific). Stay patient, use the tricks I mentioned in the preceding paragraphs, and, above all else, STAY POSITIVE. Focus on what you can do, track recovery benchmarks and PRs, and keep your eyes on the prize. The time will go by faster than you think and, before you know it, you’ll be back in PR land.

Good luck with your training and may your injuries heal QUICKLY.