Generally speaking, traditional powerlifting programs call for prescribed sets, reps, and weights. Often times, several months’ worth of training is written in advance. Assuming the conditions are the same as when the program was written, and the lifter progresses at a predictable rate, this actually doesn’t present a problem at all.

If you’ve been an avid follower of the Powerlifting Programming Series thus far, and you haven’t checked out ProgrammingToWin

, now would be the time. Not only does the book delve into the “why” behind proper powerlifting programming, but it also includes multiple programs for all levels of advancement. If you don’t want to wade through program review after program review to find the best program for YOU, get a copy of ProgrammingToWin and simplify the process.

Listen To Your Body

And yet I’ve never met a single lifter who doesn’t occasionally experience significant life stress, get poor sleep, eat poorly for a day or two, get sick, or a myriad of other possibilities that may change the conditions for the lifter on any given training day. That is to say nothing of predictable progress which can often be anything but.

This fluctuating variable is called an athlete’s level of “readiness”.

Many powerlifting programs pretend readiness just doesn’t exist. There is no regulation. You get your prewritten program, you hunker down, and you getter done. That’s all there is to it. If the program calls for 85% of a hypothetical number that may or may not have any bearing on what you’re actually capable of that day, that’s what you do regardless. But we all know that “85%” will not always feel like “85%”.

More experienced lifters will adjust based on these subjective feelings. They call it “listening to your body”. By “listening to their body”, older hats in the game know when to push themselves hard and when to pull back.

That’s nice and all, but how in the world do you bottle that up and teach it to younger, intermediate lifters? Perhaps more importantly, how do you objectify “listening to your body” so that it can be measured, repeated, and used as a serious training tool even for the most advanced athletes?

Before I go further, I’m going to provide a very brief background from Mike’s site:

Mike Tuchscherer is the founder of Reactive Training Systems as well as a competitive powerlifter. In his own powerlifting career, Mike has racked up wins all over the world including national titles, world records, and IPF world championships. In 2009, Mike went to Taiwan and became the first American male in history to win the gold medal for Powerlifting at the World Games. Since, he has been pursuing raw competitions where he has continued to set records and compete among the best on the planet. Professionally, Mike has coached 12 national champions, 2 IPF world record holders, national record holders in countries throughout the world, pro level multi ply lifters, strongmen, and literally hundreds of lifters who have set incredible personal bests following Mike’s coaching advice.

Just to give you an idea of his ability, Mike totaled 2020@264lbs this year at the Arnold. His PRs add up to over 2100. This is raw and this is drug-tested in the IPF on a 2 hour weigh-in. Yes, he’s that good. The man has proven his system in the real world. 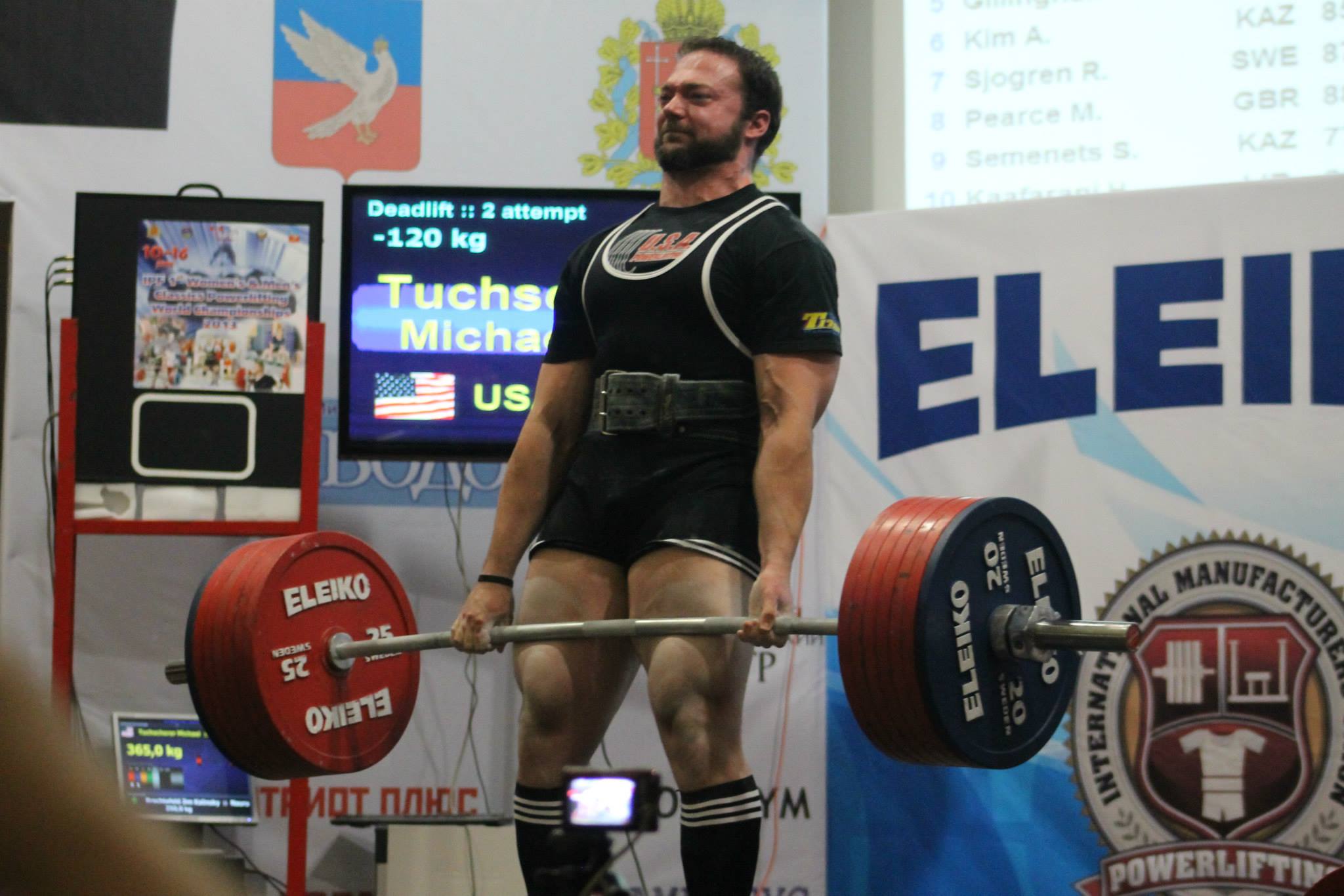 Let’s get back to RTS.

Why is RPE important? Well, RPE allows us to extrapolate intensity from any given work set. Instead of working with a made up hypothetical percentage, we can use the reps, weight, and RPE of a set to determine our “training max” for that day. For example, if you worked up to a set of 405×5@9, that would mean, for that day, 405 was approximately your six rep max. Using this data, we can fairly accurately estimate a daily 1RM (one rep max).

This works in both directions. Again, instead of prescribing a %, if I want a lifter to work in the 80-85% range, I may decide to tell them to work x5@8-9. I know that if they’re doing sets of 5 with 1-2 reps left in the tank, for that day, they’re working at approximately their 6-7RM which neatly corresponds to that 80-85% range.

In my opinion, the true “genius”, if you will, of the RTS system lies in the concepts of “fatigue” and “fatigue management”.

Before I define fatigue, let’s talk about what fatigue isn’t. If I tell a lifter to do 405x5x5 for their workout on Monday, we can accurately calculate volume: 405lbs x 5 x 5 = 10,125lbs. Let’s say that I can even accurately gauge intensity somehow and let’s say the 5×5 was completed at 75% of 1RM. We now know the normative volume would then be: 10,125lbs * .75 = 7594lbs. We could then compare this normalized value to other scenarios with higher or lower intensity.

However, none of this information tells us anything about what this actually did to the lifter. For some lifters a 5×5@75% may be crippling. For others who are well conditioned, it may not even be enough to produce an adaptation. In fact, even for the exact same lifter, on some days, this load may constitute too much work for effective training and, on other days, it may be too little. When volume is prescribed in advance, you’re just guessing and hoping at the effect of the prescription.

The concept of “Fatigue” addresses this conundrum. In RTS, a lifter works up to an “initial” set. For example, their workout might call for x5@9 which would simply mean that they need to work up to a set of 5 with one left in the tank. Once they hit this “initial”, their baseline performance is established for the day.

Fatigue percents can now enter the picture. Let’s imagine that a lifter worked up to 500×5@9. If the lifter wants to accumulate 5% fatigue, he would simply remove 5% from his “initial” (baseline performance) and bring the bar down to 475.

Now, here’s the kicker. The lifter would repeat sets of 5 at 475 until 475×5 became an RPE of 9. Because we know the initial baseline performance, reaching the same RPE at 5% less weight demonstrates to us a 5% performance drop a.k.a. “fatigue”.

Here’s why this is so important. Instead of just guessing at the effect the volume we prescribe is having, with fatigue percents, we can be sure the lifter is accumulating the exact amount of stress that is desired. For older lifters or those who have poor recovery for whatever reason, it may only take one set to accumulate 5% fatigue. For well-conditioned athletes who are having an amazing day, they may end up doing ten sets to get that same level of fatigue.

Regardless, the volume prescription has the intended effect and is completely autoregulated based on what is happening during the actual training session!

The Power of RTS

Due to the combination of RPE and Fatigue Percents, a lifter’s poundages and volume are completely autoregulated by what they personally are capable of.

If a lifter is young and adaptable, they may have to work up to a 20-30lbs PR in order to hit their prescribed RPE. If a lifter is having a bad day, they won’t work up as heavy as usual to hit their RPE. Imagine any circumstance you want. The bottom line is that the lifter’s weights for the day are determined by their own personal readiness.

And with fatigue percents in play, volume is controlled in much the same manner. On great days, you’ll do more volume because you won’t tire out as quickly during your “fatigue” drop sets. As you grow and become a better athlete, you’ll become more conditioned and you’ll require more sets to reach your fatigue percents — there is a built-in growth mechanism for long term progress.

The Drawback of RTS

The single biggest problem with the RTS system is that it introduces the element of potential user error. If you’re supposed to load up a certain weight and do a certain amount of reps, there is little room to fudge things up without going completely off script. With RTS, a lifter must be simultaneously brutally honest and hungry for improvement.

If you’re not brutally honest, you’ll always rationalize how you could have done one more rep if there was a gun to your head. That isn’t the point here. You need to be as objective as possible in rating your RPEs. Likewise, if you’re not aggressive, if you don’t expect to improve, if you don’t want to work hard, RTS will offer a convenient way out of every single workout: just inflate your RPEs.

Of course, being able to accurately rate RPE is also a skill set that is developed with practice. At first, users will make errors, not because of psychological defects, but because they simply aren’t used to thinking about RPE in such precise terms. With any new system, there is an adjustment period.

To successfully wield the RTS system requires both physical and mental strength. You have to stay objective or the system won’t work properly.

As much as it pains me to say this, I actually do not recommend that you start off with the RTS Manual. 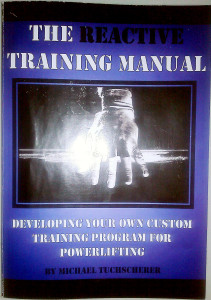 My copy of the RTS Manual.

All of the information you need to successfully run the program is available on the Reactive Training Systems article section. If you’ve read ALL of the articles and you want further understanding, particularly of the more advanced concepts, then the manual is definitely worth picking up.

Here’s the problem with the manual. First of all, you pay about $40 for an 80 page booklet. Now, this thing is jam-packed with information. There is almost zero fluff. But as I said, most of the information in the book is now available for free on the internet.

Further, some of the manual is clearly out of date. Mike doesn’t use all of the same concepts and strategies anymore. Namely, he’s very clearly moved away from the Westside structure and now his templates seem to be full body affairs. When I compare the manual to the Generalized Intermediate Program, he also doesn’t seem to organize training cycles in quite the same way that is presented in the book.

So, as I said, I don’t consider the manual a necessity. I will say that there are nuggets of wisdom in the manual that will save you a lot of time in implementation.

It is my personal opinion that RTS is the best powerlifting system currently available. Tuchscherer has developed something that is the cutting edge. What I’ve talked about in this article is truly only the surface level of what Mike has going on over at ReactiveTrainingSystems.com.

I believe in this program so much that I’ve signed up for Mike’s coaching service. There’s only one problem… I’m not the only one who had that idea! Mike is actually so busy that he has an extensive waiting list. In the meantime, I’ll be using the RTS Generalized Intermediate Program to prepare for USPA Nationals.

I rarely give such a strong recommendation, but, at this time, RTS is the only commercially available powerlifting system that I’m willing to give my 100% endorsement.

RTS is the real deal, guys. Do yourself a favor and check it out. If you want the manual, grab a copy here.

Did You Enjoy The Powerlifting Programming Series? If so, you’ll absolutely love our eBook ProgrammingToWin! The book contains over 100 pages of content, discusses each scientific principle of programming in-depth, and provides six different full programs for novice and intermediate lifters. Get your copy now!