One of the most common complaints I receive when it comes to RPE-based programming has to do with the perceived difficulty of rating RPEs. For whatever reason, some people view RPEs as practically mystical; they feel like it is just completely impossible to truly rate them accurately. What I want to cover in this article is a loose, but still fairly objective frame work for rating RPEs correctly. Hopefully, the following article will give you more confidence to run RPE based programs such as those found in ProgrammingToWin2. 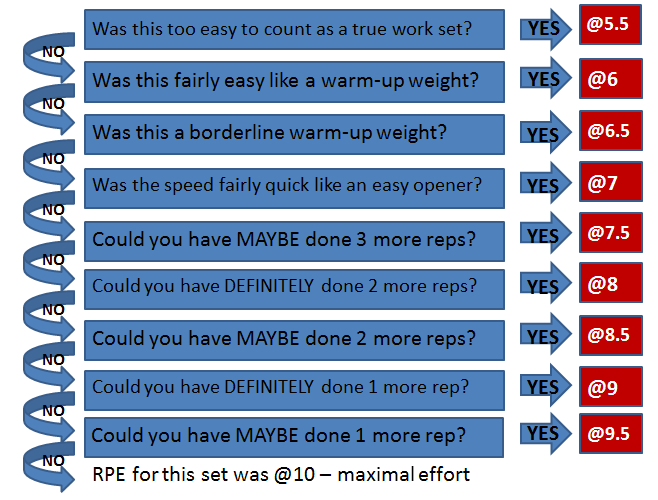 If you watch a lifter lift for long enough, you will get a sense of how many more reps they can do or how hard the lift was just by observing their bar speed. This is a simple fact that anyone who has been lifting weights for more than a few months understands well. If the rep was super fast, it probably wasn’t hard; if the rep was super slow, it was probably a relatively hard rep.

Here is my basic scale for rating RPE assuming that someone has a standard strength curve:

@6 (or less):
There will be close to no perceptible slowdown from the first rep to the last. The only way you can differentiate @6 sets from sets below @6 is by the overall speed of the entire set. Warm-ups will move differently from a set that is even remotely challenging. That said, the fact that there is very little change in speed from the first rep to the last is what makes it nearly impossible to rate sets that are less than RPE 6.

@7:
There will be a perceptible slow down on the last rep of the set. To be clear, the key differentiator between @6 and @7 is the speed of the last rep. The last rep of an @7 set will clearly look harder than the first.

@8:
For an @8 set, you’re going to want to look for a significant slow down on that last rep. In other words, it won’t just be a perceptible slowdown where the last one is clearly slower than the first, but you’ll actually start to see that last rep being relatively “slow” in general. Again though, you’re looking for a significant slowdown on the last rep for an @8 set.

@10:
A true all-out effort rep is going to come to a complete stop in the sticking point or come very, very close. If a rep takes multiple seconds, you’re likely looking at a true RPE 10 rep.

Pro Tip #1: Judge RPE by the slowest part of the RoM

One of the biggest mistakes that people make when judging RPE is that they base things off of the fastest part of the rep. A good example of why this is an incorrect thing to do is to simply look at any flatback sumo deadlifter (Yuri Belkin is one that comes to mind). As soon as the bar leaves the ground, it shoots up to lockout. The reason for this is that breaking the bar from the floor is by far the hardest part of the RoM for a flatback sumo deadlifter. The only thing that matters for RPE is how fast the bar breaks the floor. Make sure your judging your lifts by the SLOWEST part of the range of motion rather than the fast part or even the lift as a whole.

Pro Tip #2: Not Everyone Has A Standard Strength Curve

Like with all things in lifting, there really aren’t any hard and fast rules. Some people have weird strength curves and this scale will have to be heavily customized. For example, I once had a training partner who basically went from @7 to @10 on their squats. In other words, once they had even one rep that was perceptibly slower than the last one, the next rep was going to be an all-out grind or even a miss. On the other hand, I’m currently working with someone who can grind three or four reps in a row on squats. So, if you’re keeping score at home, for them, an @6 squat looks pretty similar to most people’s @10 squats.

My old training partner Justin Randal barely missing 500×10 on squat (notice how it goes from blinding speed to fail instantly):

These types of weird anomalies do exist so you will likely have to customize the loose framework I gave earlier for certain lifts for certain people. As a whole, applied across broad populations, the bar speed scale works pretty well, but it isn’t a panacea and you need to be aware that some people really are special snowflakes.

The last point that I want to make in this video has to do with quarter RPEs: 0.25 or 0.75. The easiest way that I can explain this is by talking about near-max singles. Let’s say you just did your second attempt at a meet. You know you can do about ten more pounds, roughly 5kg, but there’s no way you could have gotten a second rep. Would you tell someone that it was an @10 rep? Well, you could, but you’d be losing information unnecessarily. In this case, I’d call the rep @9.75 which very simply means that you could have done more weight but you couldn’t have done more reps.

I know some people are going to get annoyed and claim that you can’t be that precise. Hey, I agree, you really can’t be that precise and you don’t need to be that precise, either. The whole point of quarter RPEs is that you can communicate a little bit more information about how the set felt. It doesn’t have anything to do with being so precise that you can estimate the next weight down to the decimal point. That would be ridiculous. Again, this is just a way to give yourself and other people more information than would otherwise be possible without quarter RPEs.

How to Rate RPEs Correctly

Check out the “table” below for a brief summary of the article:

Hope you enjoyed the article. Good luck with training!