Attempt selection done right is actually a brutally simplistic process. The hard part is convincing people to actually go about the process with the correct mindset.

The Point of Attempt Selection

Before we can even begin to discuss “good” attempt selection versus “bad” attempt selection, we have to establish what we’re trying to do here in the first place. As with all things on PowerliftingToWin, I’m going to approach this topic from the lens of a competitive powerlifter who is doing everything possible to produce the best competitive results. The key implication here is that I am not writing this article for someone who does powerlifting meets strictly as a method to “test” themselves. I’m writing this article, to reiterate, for powerlifters who want to maximize their placing and come away with the highest total possible. Again, one more time, this is not going to be a guide for people who are looking to hit specific numbers on specific lifts as “milestones”. Powerlifting is about the TOTAL. You can set individual lift PRs in the gym. 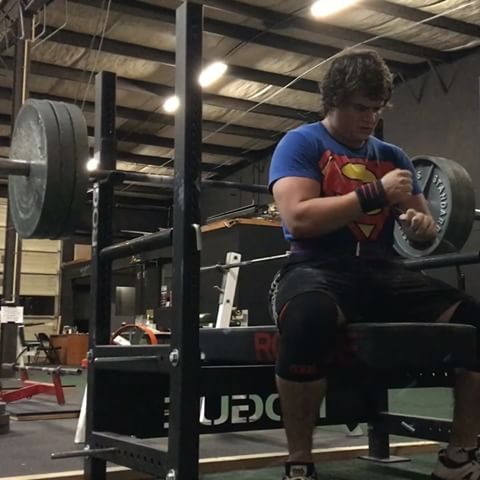 I’m not above going for 3 plate, 4 plate, 5 plate, and beyond milestones but I don’t ever make that the goal at a meet.

By missing as few lifts as possible, you give yourself the chance to have the best possible total. The strongest lifter does not always win. In fact, if two lifters are relatively close, the lifter who wins is going to be the lifter who makes more of their attempts.

The first step in proper attempt selection is to have realistic targets. The absolute best way to do this is through regular use of submaximal singles in training. I’m talking about singles done at RPE 6-9. Not only do submaximal singles act as an extremely specific means of preparing you for a meet and keeping skill high throughout the year, they offer irrefutable proof of how much you can actually lift for one rep. If you want examples of how to incorporate submaximal singles into your training, check out PIP2-PIP3 from ProgrammingToWin.

Far too many people come into meets trying to calculate their one-rep max based on sets of five or sets of eight. The further away you get from an actual one-rep max, the less accurate these one-rep max calculators are. This is why, for my athletes, I rely SOLELY on the following kinds sets to judge attempts: x1@8, x1@9, x1@10, x2@9, x2@10, and x3@10 (click here if you don’t know what the @ symbol means). In other words, any weight that you could’ve done for more than three reps is going to give you potentially misleading results if you plug it into a one rep max calculator. Rely SOLELY on three-rep maxes or lower. Again, with my athletes, we just use singles at RPE 8 to give us a great idea of what we’ll do at the meet.

Again, please do not use high rep sets to try and estimate your max for the meet.

Having been to dozens of meets in my life, I have seen some pretty bizarre things as far as attempt selection goes. I have seen everything from a guy who was screaming and yelling before failing a lift in the warm-up room all the way to a guy who opened with 405lbs/182.5kg and closed with 600lbs/270kg on squats. Let’s discuss the right way to do it.

One of the oldest pieces of advice in the powerlifting community is that you should open with something you can triple on your worst day. That is actually pretty good advice for the most part. For most people, this equates to opening around 90% of their one rep max.

However, the larger purpose behind your opener is to ensure just a few things: a) that you don’t “bomb out” (powerlifters are disqualified from the meet if they don’t register at least one successful lift in each discipline — powerlifting rules), b) prepare you physically and mentally for the second attempt and c) ensure that you’re not completely out of the meet even if you don’t hit your 2nd and 3rd attempts. This is why, for example, we don’t open with something ludicrously light like 50% of our one rep max. Not only would taking a 40%+ jump be preposterous, it wouldn’t adequately prepare us for the second attempt and we’d be completely screwed if we happened to fail the second attempt.

My bottom-line recommendation is to open around 90% of your estimated one rep max which roughly translates to a single @7.5-8 RPE. I sometimes suggest lighter or heavier depending on the lift and the size of the lifter, but this is a rock solid starting point that will work for all people on all lifts.

Again, by using 95%, you’re almost guaranteed to get the weight which means that in the vast, vast majority of cases, you’ll never walk away from even a single lift without posting approximately 95% of your best effort. This goes a long, long way towards helping you stay in the meet and potentially beating competitors.

If Lifter Two can even get another 2.5-5kg on the third attempt, they’re going to finish 5-7.5kg ahead of their competitor even though they were theoretically a full 5kg/11lbs weaker on that lift. Even if they don’t even get a 3rd attempt, they still beat Lifter One who was SIGNIFICANTLY stronger. You may think this is far-fetched, but I assure you this exact scenario plays out at every single meet that I’ve ever been to.

Ah, the third attempt, this is where you unleash the beast, take a big gamble, and go for that nice, round number milestone, right!? Hell no. The third attempt requires the most patience, objectivity, and the highest level of execution of all attempts, but you should BE CONSERVATIVE!

I tell all of my clients: “Pick a third attempt you’re SURE you can get”. Now, if I’m there in person, I just pick the number. There are obviously situations where you might want to gamble a bit at, say, National level events, but that goes beyond the scope of this article. In general, you’re going to use your second attempt as a gauge for a CONSERVATIVE third attempt. As such, for third attempts, I recommend a range of anywhere from roughly 97.5% to 102.5%.

Izzy, how is 102.5% conservative? Well, if you absolutely smashed your second attempt, which was supposed to be 95% or roughly x1@9, you’ve earned the right to take a slightly bigger jump because you’ve proven your performance is high that day. If your second attempt is @8, which is usually what an opener is supposed to be, why WOULDN’T you go a little bit higher than planned? I’m all about autoregulation, baby. That doesn’t change at the meet. In fact, learning autoregulation GREATLY helps you prepare for a meet precisely because of the fact you’ll have to make split second judgment calls about the correct 3rd attempt to pick.

Nevertheless, I encourage people to be conservative even if they’re feeling great. Again, you will ALWAYS feel better both psychologically and physically if you walk away from your third attempt saying, “I could have done 2.5kg more!” versus walking away from your third attempt and saying, “Ah, man, I could’ve done it if was only 2.5kg less”. Not only does avoiding failing lifts help preserve your energy and performance for the lifts to come (unless it is deadlift), but it also helps you avoid feeling like you got smacked by a truck in the days following the meet. You’ll be able to get back to regular training more quickly, you’ll have BUILT your confidence higher, and you’ll feel excited because you know you left a little bit on the platform which means you’ll easily smash your PRs once again in the next meet.

Perhaps most importantly, this method gives you the greatest chance of walking away with a total PR each and every single meet. As we all know, Powerlifting IS the total and a total PR is the most important PR.

This is an attempt card. Fill it out wisely, my friends. credit: NASA Powerlifting

One of the last things that I want to cover here is the issue of what to do if you miss an attempt – particular if it was due to a rules violation. The classic beginner mistake in a powerlifting meet is to miss a lift based on violating one of the innocuous rules (not waiting for the rack command, for example) and then to increase the weight anyway. Why not, right? They got the lift easily and they don’t want to ruin their entire plan because of one little mistake. Well, the problem is that if you miss the first lift due to rules, you might miss the second lift due to strength. Once you increase the weight, you cannot take it back down. This is the NUMBER ONE way that people bomb out at every single meet. Outside of injury, this is the exact formula to bomb: 1) miss a lift due to rules’ violation, 2) increase anyway, 3) bomb. 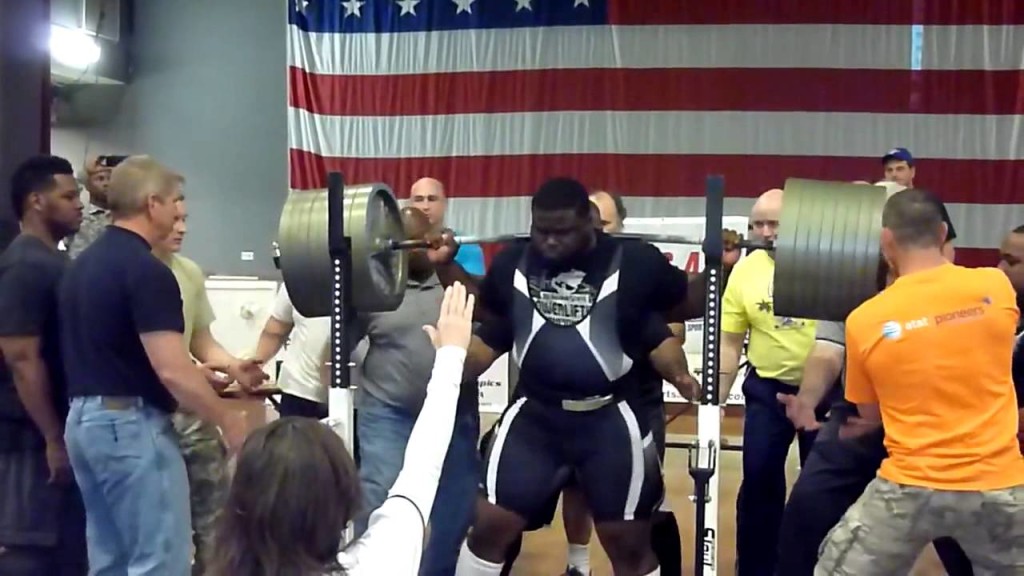 Here is Ray Williams missing a 900lbs squat (a record at the time) due to failing to wait for the rack command. This was his second USAPL meet. Classic beginner mistake. If it can happen to Ray, it can happen to ANYONE.

Don’t do it. Just don’t. It is that simple. ALWAYS, ALWAYS, ALWAYS repeat missed attempts. The only exception is if you have a coach there with you with tons of experience who is helping you make decisions. Can the gamble to increase anyway work sometimes? Yes. But that one time it doesn’t, you bomb out. Don’t let that be you.

There you have it, folks. As I said, brutally simple stuff here, but the key is the change in your mindset. Don’t go into a meet looking to hit nice, round number milestones on all three lifts. Think in terms of maximizing your total. Prioritize PR’ing on that total and getting the absolute most possible out of yourself on that given day. If you do that, you’ll end up with the best numbers you could have had regardless of what your goals were anyway.

Good luck at your next meet!