The following article is going to discuss the intricacies of the rules regarding powerlifting gear. If you’re looking for a place to get the powerlifting gear discussed in this article, I highly recommend AndersonPowerlifting.com. They’ve gone above and beyond the normal call of customer service to ensure I’m always taken care of and I go out of my way to recommend their products as a result. You’ll have a similar experience.

Skip to the bottom if you want a quick visual checklist regarding all personal gear and equipment.

If you prefer to watch, the following video summarizes this entire article in rapid fire fashion:

Let’s begin with “costume” considerations. If you didn’t already know, powerlifting meets require a singlet; to reiterate, singlets are mandatory. Cool singlets are annoyingly hard to find, but the reality is that any old singlet will do

. So long as it doesn’t exceed a quarter of an inch in thickness, and the straps aren’t wider than 1.5”, you’re good to go. 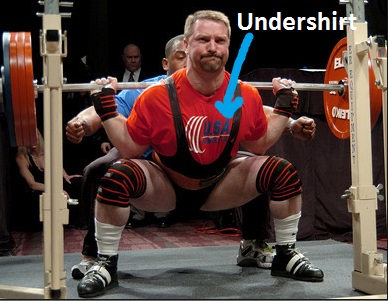 Any undershirt will do, but you’ll look stronger if yours has a nice logo.
Photo Credit: purepowerlifting.com

You won’t believe what I’m about to say next, but non-supportive underwear is mandatory and that means briefs. This isn’t a universal rule, but it is strictly enforced; double check what your federation requires on this one. Bring your whitey tighties

if you want to be allowed to compete. 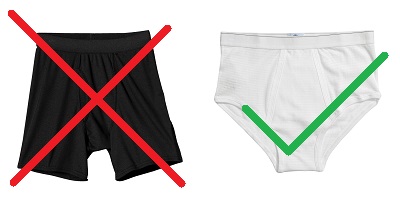 Yes, it’s true; you MUST wear whitey tighties to compete in the IPF.

Lifting belts purportedly increase safety by protecting the lower back. The truth is that most lifters are able to lift more weight while wearing a power belt and this is the real reason they are used. The belt gives the abs something to contract against, which allows for a more stable core. Can you flex your bicep harder in the mirror or while you have a dumbbell in your hand? If you don’t know, the answer is the latter. Belts function very similarly.

For more comprehensive information on lifting belts, read this article. 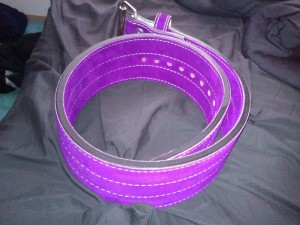 Knee sleeves may be used so long as they do not exceed 30cm in length nor 7mm in thickness. Knee sleeves may not touch any part of the singlet during a lift. Additionally, for IPF competitors, the sleeves must be from an approved brand. That list currently includes: SBD, Titan, Tommy Kono, and Rehband.

The purpose of knee sleeves is to keep the synovial fluid in the knee joint warm. I can personally attest to how much this helps keep troublesome tendonitis at bay. However, like with all powerlifting gear, some lifters are able to game the system by buying sleeves one to two sizes too small. This can yield anywhere from 5-25lbs on their squat.

For my personal recommendations, check out our knee sleeves article.

Knee wraps are not legal in raw powerlifting contests in the IPF. If your federation allows them, you’ll have to check their rulebook for specifics. Generally speaking, most federations allow for 2.5m in length and ~3” in width. You can double check your federation’s rules by referring to our visual comparison guide to powerlifting federations.

Knee wraps actively resist flexion at the knee joint. Like knee sleeves, wraps were originally intended to protect the lifter’s knees. When lifters realized they could merely wear the wraps tighter to squat more weight, well, that is exactly what they did. 2.5m knee wraps commonly allow a lifter to squat 25-75lbs more than they otherwise could. The exact number varies greatly due to wrap length, wrapping style (tightness), and individual considerations such as how often a lifter uses wraps in training.

Wrist wraps are not to be confused with wrist straps. Straps are never allowed in powerlifting competition. 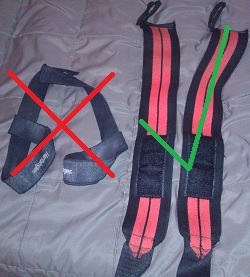 Wrist wraps may be used so long as they do not exceed 1m in length (~39 inches) nor 8cm in width (~3 inches). Wrist wraps may be worn no higher than 2cm (~1”) above the wrist joint (towards the hand). If you wrap them across the “meaty” part of the hand, your lift won’t count. 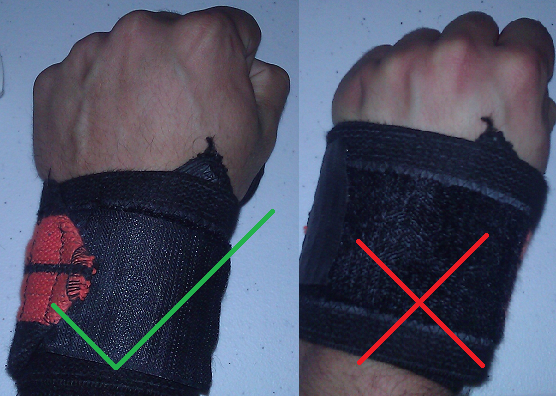 The left is a legal wrap and the right is illegal. The wrap cannot go more than 2cm above the wrist joint.

Wrist wraps behave very similarly to knee wraps; they resist flexion at the wrist joint. They are most often utilized in the bench press because they allow lifters to keep their wrists straight even while straining against heavy loads. A straight wrist is more efficient than a bent wrist. If you can’t keep your wrists straight when you bench, wraps can add a few pounds to your performance.

For more information on wrist wraps, consult this article.

You must wear something on your feet for all of the lifts. Shoes are mandatory. Additionally, no part of “the underside of the shoe” (read: heel) may exceed 5cm (~2 inches). If you use orthopedic inserts, they may not exceed 1cm in height. The shoe may not be doctored in any way. Deadlift slippers are allowed.

Most lifters utilize at least two pairs of shoes. Some lifters, including myself, even use a different pair for every lift. Shoes are required mainly because of hygienic concerns. If you drop a weight on your toe, a shoe will limit the damage to the facility even if doesn’t quite limit the damage done to you. Not to mention, being barefoot on a gym floor where dozens of other people are lifting weights is pretty damn gross.

If you’d like to learn what the best shoes are for each lift, check out our article on powerlifting shoes.

Shin length socks are mandatory when performing the deadlift. Powerlifting socks protect your shins from being cut by the bar’s knurling. We don’t want blood everywhere, now do we? 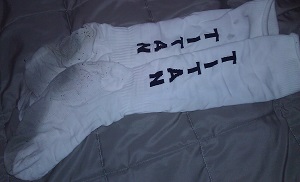 Disgusting? Yes. But also IPF approved. These are powerlifting socks.

For all other lifts, socks are optional.

Chalk is permissible for all lifts. Chalk is most often used for the deadlift because it improves grip strength. However, it isn’t uncommon for lifters to put chalk on their back while squatting to prevent the bar from sliding. Similarly, many lifters chalk their hands for the bench press to ensure the bar doesn’t move around in their grip. 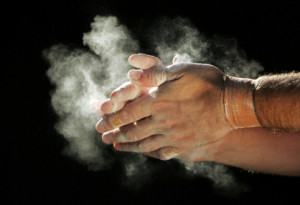 Lifters use baby powder to make it easier for the bar to slide up their legs during the deadlift. Occasionally, you’ll see a lifter apply baby powder near the underarm area in order to decrease the rub between their lats and triceps. A tiny bit of friction can be enough to prevent a lifter from setting a PR if it is truly a maximal attempt. 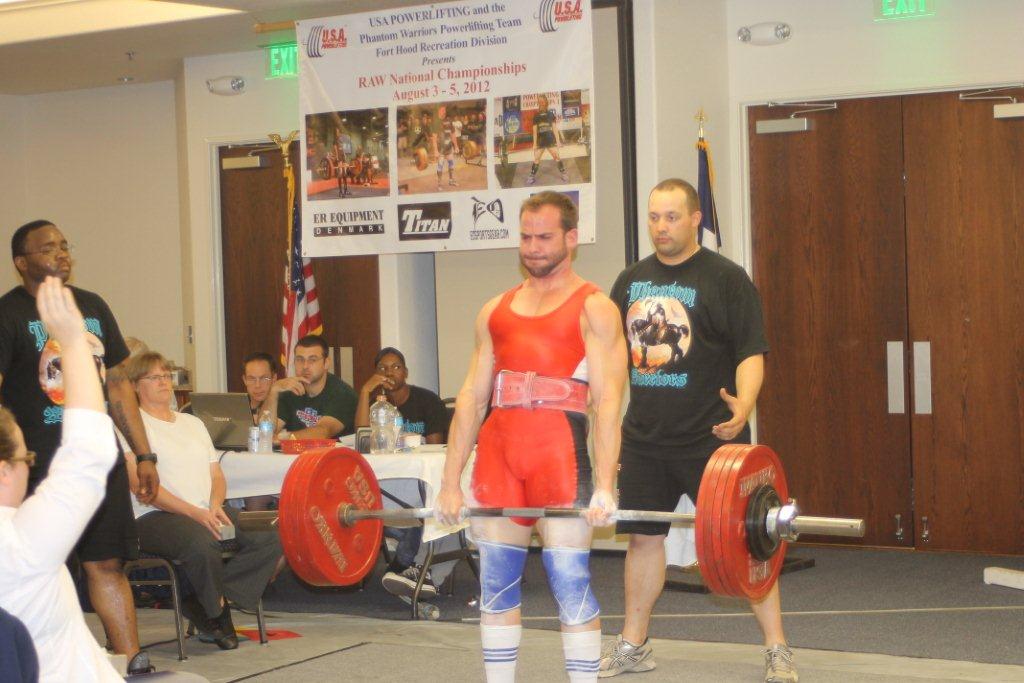 Both nose tork and ammonia are permissible. However, they may not be used on the platform or in front of the audience in the IPF.

Nose tork is essentially just a more powerful version of ammonia caps. Lifters will “hit” (sniff) ammonia before a big lift because the smell of ammonia produces immense jolts of adrenaline in the human body. Lifters can then take advantage of this surge to lift heavier weights.

All equipment that you plan to use at a meet is subject to inspection. Various referees will ensure that all of your personal gear complies with the rules. Most well run meets have equipment checks during sign-ins at the very beginning of the day. However, the IPF rulebook very clearly states that they can check your equipment at any time before your group is scheduled to begin lifting.

One final note, for IPF competition, you need to be cognizant of the brands and logos you’re displaying on your shirt, singlet, socks, and whatever else. Generally, you’re going to need written permission from the IPF to wear sponsor logos. If you’re wearing something offensive, they might refuse to let you compete.

The Best Place to Get Powerlifting Gear

As I said at the beginning of the article, if you need to pick up any of the gear mentioned in this article, the best place to do so is at AndersonPowerlifting.com. Their customer service is absolutely excellent. Shipping is timely and the pricing often can’t be beat. See for yourself.