In powerlifting, there is one number that is paramount above all others: The Total. One of the most important, and yet forgotten, aspects of technique selection for each movement is not only how it will affect that lift, but how it will affect your total.

For example, many people claim that benching with a big arch tires out their back for deadlifts. Others claim that using a wide stance squat coupled with a sumo pull leaves their hips too tired at the end of the meet. Further still, some people say that narrow squats have a higher rate of carryover to the deadlift than wide stance squats. And to be fully honest, there are people that say the exact opposite of everything I’ve just said!

This article is not going to be about helping you find “The One True Way”. As with most things in powerlifting, technique selection is incredibly nuanced and there are so many variables in play that, most of the time, you simply have to experiment and “find what works for you”.

However, that doesn’t mean there aren’t starting points for personal experimentation that make more sense than others. Though I’m generally not a fan of merely copying what the best guys are doing, I thought doing a short statistical analysis of the squat and deadlift technique pairings of the top American deadlifters might shed some light onto what squat techniques lead to the biggest pull at the end of the meet.

Setting up the Study

In order to select the lifters which I would analyze, I used PowerliftingWatch.com’s All-Time American Rankings. I used the Top 5 Deadlifts from each weight class up to 275lbs. If the lifter did not perform the lift at a full meet, I either used numbers from that lifter that did occur at a full meet or, where I could not find full meet data on a lifter, I simply moved down to the next lifter on the list.

Just to give you an idea of the caliber of lifters that were studied, here are ten guys that were included in this study: Eric Lilliebridge, Dan Green, Stan Efferding, Jesse Norris, Brandon Cass, Vashon Perryman, Richard Hawthorne, Perry Ellis, Ernie Lilliebridge Jr, Brantley Thornton, and Kade Weber. 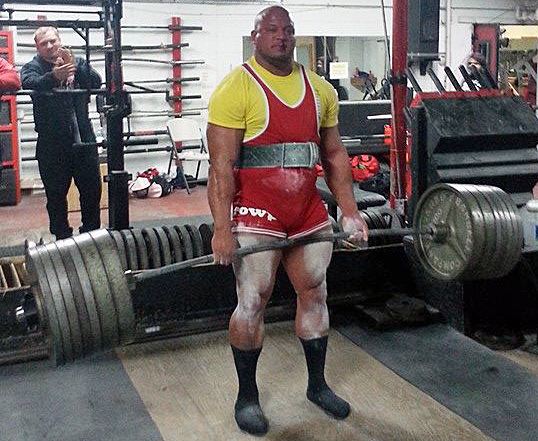 I think it is important to keep in mind that this study only includes American lifters. This is going to predispose the data to a number of biases. Lifters from other countries pull sumo in much higher frequencies than here in the USA.

“Foreign” All-Time World Record holders such as Belyaev and Pozdeev were not included in this study.

Additionally, because I focused on the top deadlifters, most of these guys are going to have body types that are naturally suited to the deadlift. Likewise, because the two go hand in hand, in many cases, they will have body types that aren’t particularly suited to the squat. Because of this, I think it is less important to consider each variable in isolation and more important to consider them together in context.

Simply put, we need to focus on the technical pairings of each style rather than how many people use a specific style. For example, it is more useful to know that wide stance squatters prefer sumo deadlifts than it is to know that most deadlifters, in general, do not prefer the sumo deadlift.

With that in mind, let’s crunch the numbers.

People outside of the sport often bitch about sumo deadlifts, but the reality is that most of the top American deadlifters pull conventional style. Of the 40 lifters cataloged, only 12 pulled Sumo or 30%. 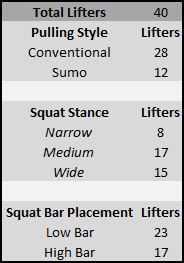 As I said, this data is interesting, but it isn’t as revealing as when we start to look at how top lifters combine their techniques for best results.

In terms of bar placement, only 1 sumo puller used high bar. However, the majority of conventional deadlifters squatted high bar with 16 of them preferring the higher bar position (57%). 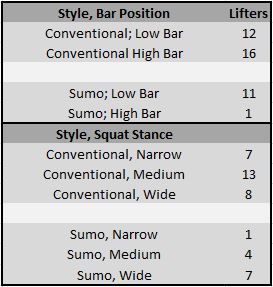 Taking Everything Into Consideration

If we consider all three variables simultaneously, further insights can be gleaned. For conventional deadlifters who used the low bar squat, 10 out of 12 (83%) preferred a medium or wide stance. For conventional pullers who used a high bar squat position, 13 out of 16 (81%) preferred a narrow or medium stance. The sumo pullers were even more segregated; 11 of the 12 sumo pullers preferred a low bar position with a medium or wide stance. 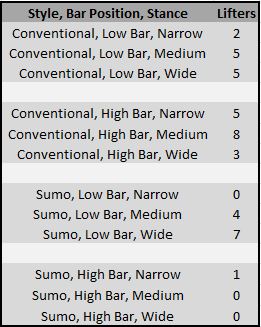 What did we learn?

I think there are several important facts to point out here:

In terms of carryover, this makes a great deal of sense. The more similar the stance, the more similar the biomechanics of the two movements are going to be. This is going to lead to greater rates of transference to the deadlift when a lifter drives his squat up.

There are many of us who feel pretty strongly about the superiority of the low bar squat for powerlifting, but this particular data set very clearly shows that most conventional pullers actually prefer a more quad dominant squat pattern. The majority squatted high bar and the vast majority used a narrow or medium stance; both of these technical changes are going to emphasize the quads to a greater degree.

In direct contrast to conventional pullers, low bar squats were nearly unanimously chosen by sumo pullers. This too makes a great deal of sense. The low bar squat exchanges a less upright back angle for far more posterior chain and hip involvement. For a sumo puller who relies on posterior chain strength as it is, it logically follows they’d use a squat technique that also allowed them to take advantage of those strengths.

By request, I am uploading the raw data for which this study was based on: Squat to Deadlift Carryover Data.