As far as I am aware of, there is only one book in existence that analyzes lifting from a framework of biomechanics and classical physics: Mark Rippetoe’s Starting Strength

. Though the book is focused on general strength techniques, the powerful powerlifting optimizations contained in this article were distilled from principles found in Rippetoe’s book. If you like to learn, grab a copy of Starting Strength.

In the first installment of this series on powerlifting technique, we established four scientific principles to help us determine the optimal form for any given lift. They were as follows: 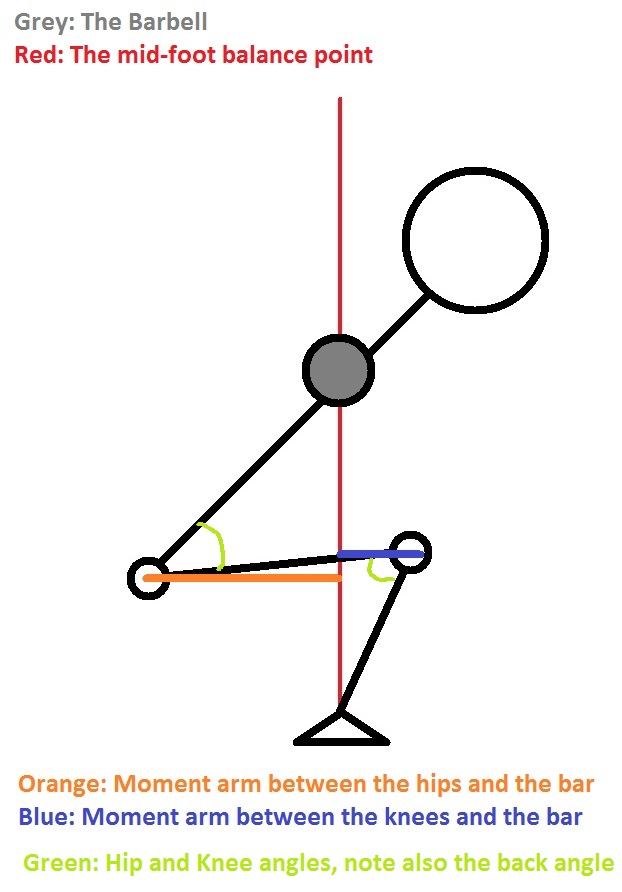 At heavy enough weights any attempt to squat forward or backward of mid-foot is futile. This imbalance is going to create an unnecessary lever arm between the middle of the foot and the bar. Remember, we want to minimize lever arms NOT create new ones! Fortunately, the body doesn’t usually allow for imbalanced positions under a heavy load.

Because the bar must remain over mid-foot to be balanced, the way you carry the bar is going to have a big impact on your back angle and knee angle in the bottom of the squat. Take a look at the front squat, high bar back squat, and the low bar back squat respectively:

The Front Squat requires a very upright position because if you lean over too much the bar simply falls off your shoulders. Because the bar must also remain directly over mid-foot, this means that, in order to produce this upright position, the entire movement is going to consist mostly of forward knee travel. There is no other way to get the bar over mid-foot without it falling out of the rack position.

Before I go any further, can you use more weight on the front squat or the back squat? I’ve literally never seen anyone capable of front squatting more than they can back squat. The primary reason for this has to do with the manipulation of lever arms caused by the upright front squat back position. 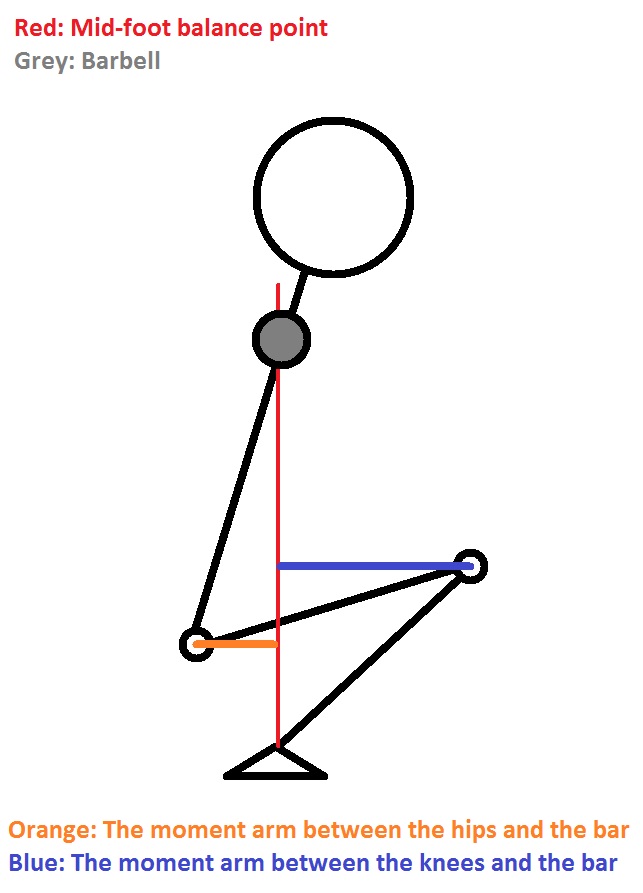 The reason this causes you to lift less weight is very simple. When nearly all of leverage is between the knees and the bar, the quads must do nearly all of the work against gravity. The quads, while big, are but one muscle group. The hips, on the other hand, consist of the glutes, the adductors, and the hamstrings. Together the “posterior chain”, as it is popularly known, is simply a much larger, stronger group of muscles than the quadriceps.

We want the posterior chain to do most of the work because it is more capable of doing so. In order for this to happen, we to need ensure that most of the relevant moment is between the hips and the bar rather than between the knee and the bar. Here we run into a “problem”.

With the typical high bar position used by many powerlifters, particularly bigger guys with inflexible shoulders, you must remain relatively upright or the bar will simply roll off your traps onto your neck. The high bar position certainly allows for more hip involvement than the front squat, but there is an even better option: the low bar squat (left, below): 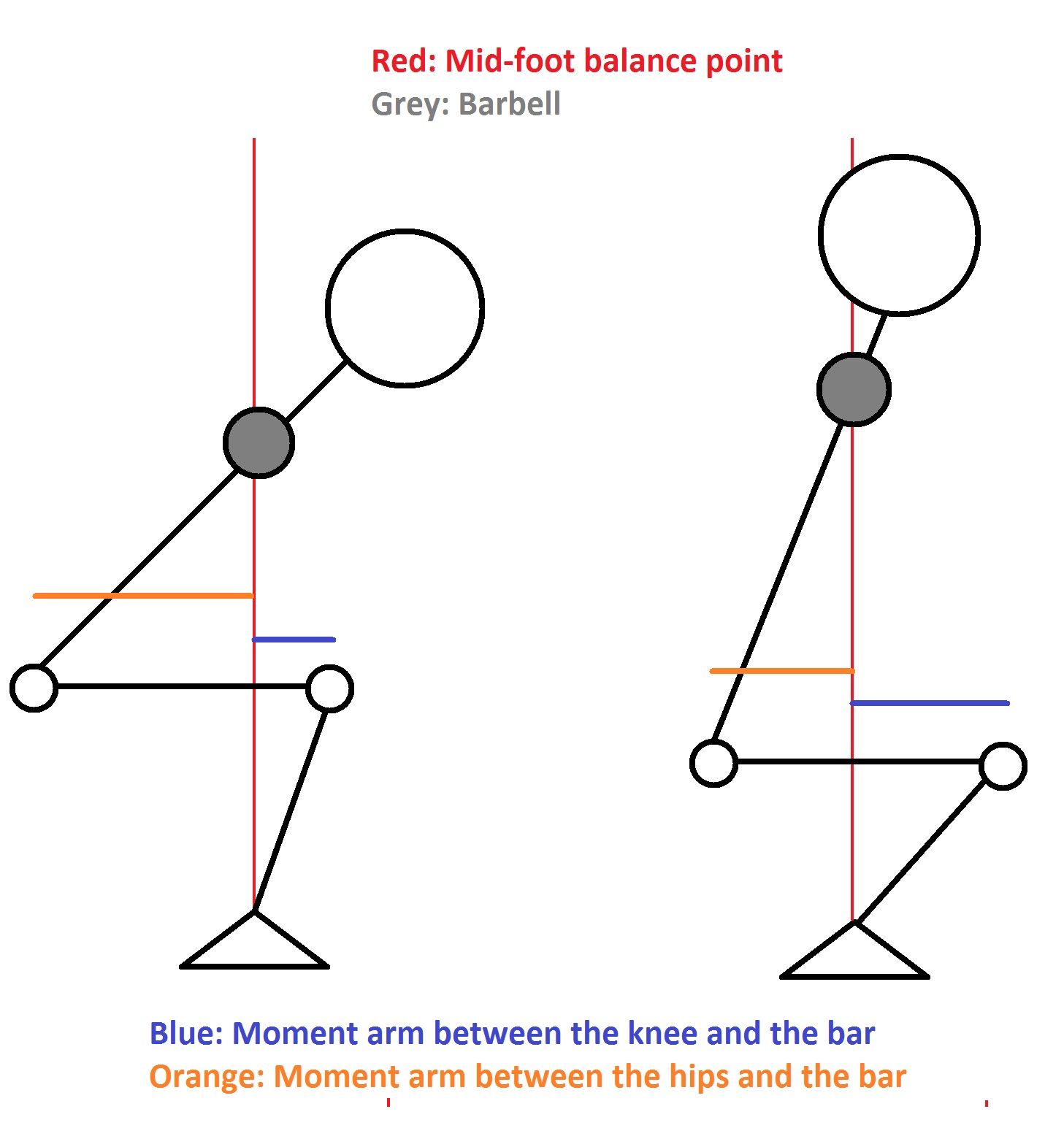 Very frequently, lifters will criticize low bar squats as “good mornings” because squatters who employ this style often lean over quite a bit. While it is true that the more leaned over style of the low bar position is harder on the lower back than the more upright high bar position, calling it a “good morning” is completely inaccurate.

The good morning purposely uses an unnecessary lever arm between the bar and mid-foot to challenge the stabilization capacity of the spinal erectors. The large moment arm between the foot and the bar makes the erectors have to work overtime to keep you from falling over whilst simultaneously holding such a horizontal back position. 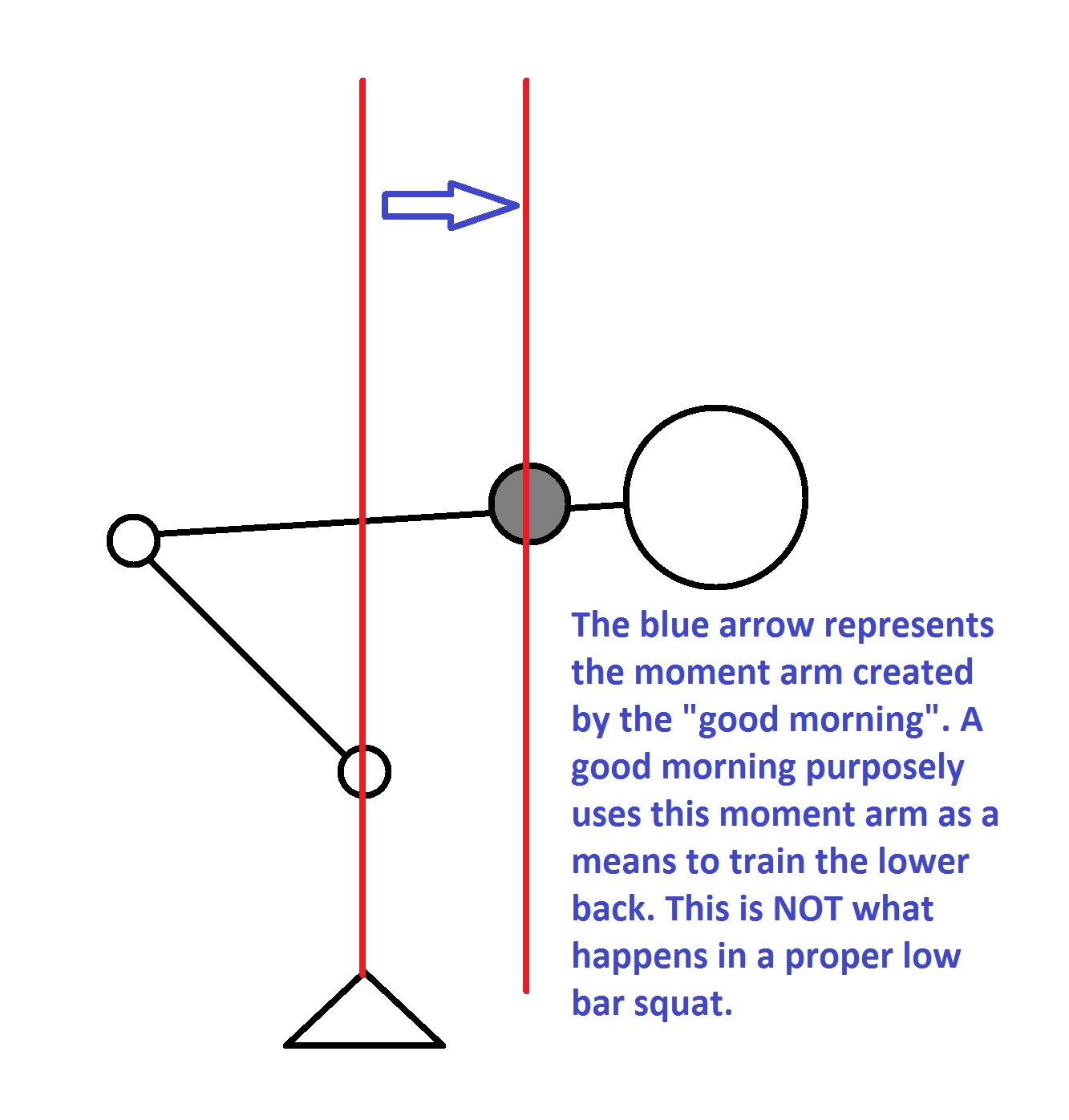 While a low bar squat may be bent over, it has little else in common with the good morning. The point of the low bar position is to allow you to carry the bar in such a way that it both: a) causes you to lean over more and b) allows you to do so without the bar slipping off of your back. In fact, if necessary, your back could be almost entirely parallel to the floor and the bar still wouldn’t move with a low bar rack position.

For the purposes of powerlifting, low bar is nearly always superior to high bar.

The primary determinant of the how long these moment arms are is the length of your thigh. The shorter your thighs, the less moment you’ll have to overcome when you squat. This is why guys with longer torsos relative to their legs have reputations as good squatters. 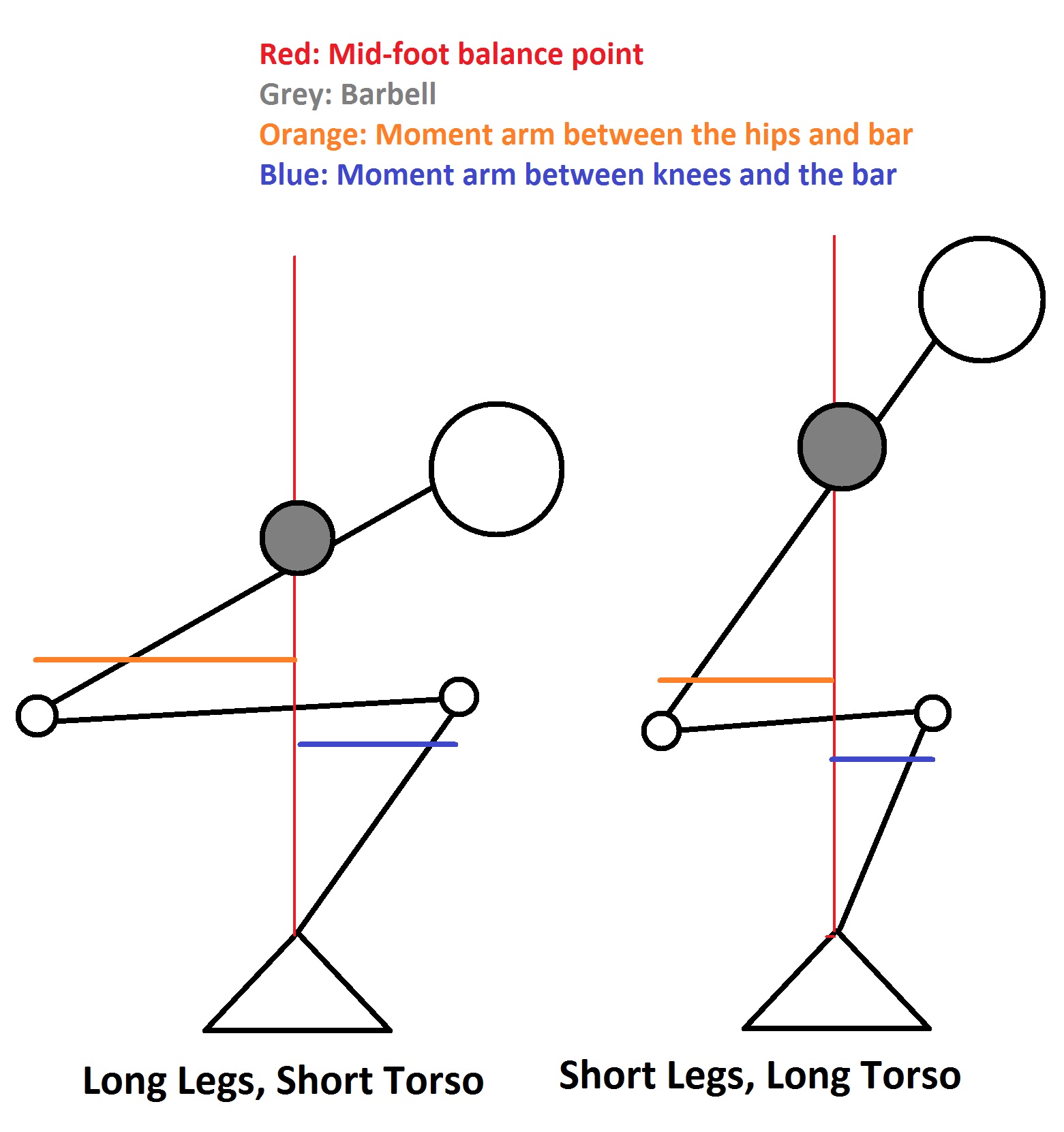 Taking a hacksaw to our bones isn’t a realistic option, but, luckily, there is something we can do anyways: stand wider. Yup, that’s it. All it takes to artificially shorten your thigh segment, for the purposes of the squat, is to take a wider stance and make sure you keep your knees pushed out.

Obviously standing wider doesn’t actually shorten your leg. All it does is put your legs at a more diagonal angle which shortens the horizontal distance between the hips and the knee. The leg length remains the same. 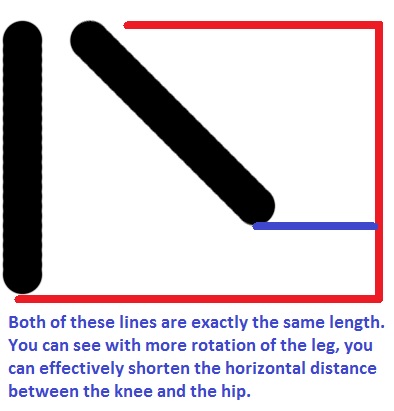 A wider stance is also going to allow you to be far more upright when you squat. The reason for this is very simple. If you’ve decreased the distance between your hips and the bar, you don’t have to lean over as far to get the bar over the middle of your foot. Not only does the wider stance manipulate the moment arms involved in the movement favorably, but it also mitigates the disadvantage of the low bar position. When you squat wide, you get the best of all worlds: an upright hip dominant squat with small moment arms.

If that wasn’t enough, standing wider also reduces the range of motion in the movement. The diagonal position of the legs in the starting position is going to reduce the vertical distance between the hips and the knees. Remember the squat’s rules; squat range of motion has to bring the crease of the hip below the knee. The further apart the hip and the knee are, the longer you have to travel. By standing wider, and bringing these two points closer together, we don’t have to move the bar as far.

Knee Travel in the Squat

So, even if you’re low bar squatting, how far forward should your knees go?

Some of you may have realized that you can actually completely eliminate the lever arm between the knees and the bar just by shoving your hips back even more and leaning even further forwards. 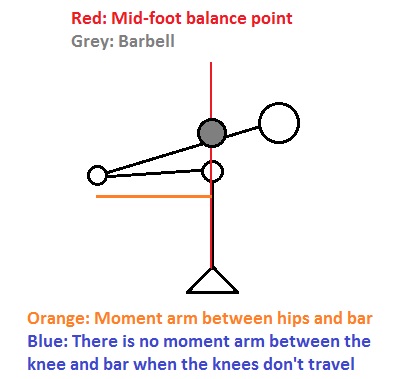 First let me be clear, this does not work at light weights. You still need to keep the center of mass (CoM) of the system over the middle of the foot. However, at heavy enough weights, the bar itself approximates the system’s CoM. At this point, putting your body behind behind the bar has a nearly negligible effect on the balancing the system (your body weight will always factor into CoM at least a little no matter how much weight you use). In the case of high bar vs. low bar, if less knee travel is better than more travel, why isn’t no knee travel even better?

Well, in fact, sometimes it is. For example, in geared powerlifting, where lifters wear specialized squat suits, minimizing any knee travel makes a great deal of sense. After all, the suit is helping hip extension. To take advantage of the suit, you’d want as much leverage as possible to be acting at the hips.

But what if you’re a raw squatter who is wearing knee wraps? Entirely eliminating the moment arm between the knees and the bar in this case will result in your not getting very much carryover from the wraps. Further still, what if you’re a raw squatter wearing nothing more than knee sleeves? In this case, you’re not getting equipment help at either of the relevant joints.

Here’s the thing. It isn’t possible to make a recommendation for knee travel except on a case by case basis. For people with long legs relative to their torso, zero knee travel will put their back nearly horizontal to the floor in the bottom of the squat. This just won’t work. It is too hard on the lower back. For others, having your knees go all the way out over your toes, even in a low bar position, will result in something that resembles a high bar, upright squat.

What you’re really looking for, as a raw lifter, is an amount of knee travel that will result in a back angle of approximately 50 to 60 degrees in the “hole” (at the bottom of the squat). Though I hate using this argument, this is the back angle most often observed when watching world recording holding squatters. From my experience squatting 551 at 220lbs, this is also what has worked best for me personally. At this time, I don’t have a recommendation for knee travel that is based on physics and biomechanics. 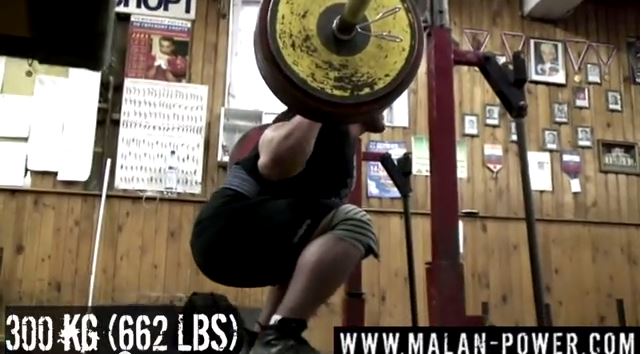 The back angle of the greatest squatter of all-time: Andrey Malanichev.

Anything more upright than a 50 to 60 degree back angle in the hole just isn’t necessary. If you’re more upright than that, you can afford to lean over more and shift some leverage onto the hips. Anything less than 50 to 60 degrees results in a squat that is very taxing on the lower back at heavy weights. This isn’t ideal because we want our prime movers to be the limiting factor. Prime movers are big muscles that are easily hypertrophied and trained. Stabilizers, generally speaking, are smaller and harder to improve upon. If you’re very bent over in the squat, you’ll usually benefit from a wider stance and more knee travel. Of course, for some folks, no matter what they do to manipulate the leverages, they’ll still be quite bent over because that’s just how they’re built. Nonetheless, you must do your best to optimize what you were given.

With that in mind, let me reiterate that the exact back angle and knee position that you’re looking for is completely dependent on your muscular strengths and individual anthropometry (limb lengths, muscle attachments, etc). However, more often than not, raw lifters can be observed to have a final knee position in the bottom of the squat that is within 1-2” of their toes in either direction (behind or in front).

Never in my life have I ever drawn so many stick figures. If you’re anything like me right now, you probably want some examples of the concepts we’ve discussed that actually use real human beings. If so, this video is exactly what you’re looking for:

Thus far, we’ve established WHY the optimal squatting technique for powerlifting includes a low bar position and a wider stance. Next, we’re going to discuss HOW to actually perform a powerlifting squat.

If you found this style of analysis to be refreshing, intriguing and valuable, Starting Strength

is a must read for you. The book contains of 300 pages of detailed analysis on how to apply the principles of physics and biomechanics to the major compound lifts. This isn’t just about about some newbie’s program; the book is a veritable reference guide for how to analyze the lifts through a scientific lens.

In Part III, we’ll cover exactly how to get into the low bar position, how wide to stand, where to put your hands, and a variety of my favorite coaching cues that increase squat performance.