Next up the Program Review queue is Stephan Korte’s 3×3 routine. There is no eBook or product associated with this program. You find the original articles written by Korte at the DeepSquatter archives.

A lot of people have been complaining that these reviews have become unnecessarily long and wordy so we’re going to blast right through this one. 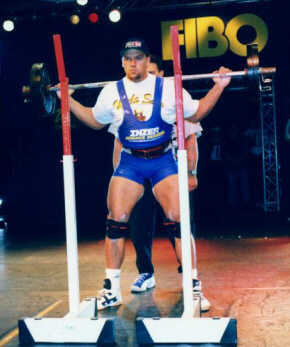 Like most Eastern bloc coaches, Korte’s programming was heavily influenced by Olympic weightlifters such as the Bulgarians. As such, it shouldn’t come as any surprise that his programming features incredibly high frequency and virtually zero assistance exercises. Like the weightlifters he modeled, he believes that you must practice your competition form to perfect your competition form.

For a preview of the program, check out the Korte 3×3 Spreadsheet.

Korte’s 3×3 is a % based program that employs a future projected max as the basis for all percentages. You’re instructed to take maxes under competition conditions (including all gear), or to use a known competition maxes, and then add 25lbs to the squat, 10lbs to the bench, and 15lbs to the deadlift. These projected maxes will be used to calculate all your working weights.

One of the most important features of Korte’s 3×3 is the energy saving method (“ESM”). ESM means that you use the minimum amount of effort to lift the weight. Unlike Westside style speed work, you actually are instructed to use as little psyche, as little effort, and as little speed as you need in order to complete your lifts. You are literally minimizing effort to save energy.

Korte’s 3×3 is broken up into two distinct parts: Phase I and Phase II.

Phase I is four weeks long. As you can see, you’ll perform 5-8 sets of 5 on the squat and the deadlift and 6-8 sets of 6 on the bench press.

Starting at 58% of your projected max, each week you increase the weights by 2%. You perform the exact same workout every single time you lift for the full four weeks. The only difference from week to week is the 2% weight increase.

It is important to note that you will not be using any powerlifting gear during this period. The only exception is a belt for squats and wrist wraps for the bench.

During this Phase, you’ll work up to a heavy single once per week on each lift. Korte suggests hitting the deadlift single on Monday, the bench single on Wednesday, and the Squat single on Friday. In Week 1, the single will be 80%. You’ll use full gear for all singles including knee wraps, belt, and squat suits or bench shirts. Each Week the weight of the single will increase by 5% culminating in a 95% attempt on Week 4 of Phase II.

The rest of your workouts for each lift during Phase II will feature 3×3 performed at 60% of your projected max. The one exception is bench press which will use 5×4 performed at 60% instead.

Again, if you don’t want to do all this math, grab Korte’s 3×3 Spreadsheet.

As you can see, Monday is just a typical workout from Phase II without any singles being performed. Wednesday, however, is a slight deload featuring 3x3s at 50% instead of 60%. From there, you just rest until the competition. Given that this is a high frequency, high volume template, it makes sense to maintain higher volumes and frequencies going into the peak to prevent detraining.

This program features block periodization in the strict sense. That is, Phase I is entirely dedicated to work capacity, hypertrophy, technique, and overall volume tolerance. You’re performing anywhere from 60-146 lifts above ~60% for all three competition movements each week.

Then, without any transition whatsoever, your volume is cut by 100-200% as you shift into the next block. You perform about 20 lifts above 60% each week. Phase II, the second block, is dedicated to max strength and peaking for the upcoming competition.

Korte’s 3×3, as you can see, features absolutely no programmatic variation within each training week beyond. And the only variation you get from microcycle to microcycle is a 2% increase in working weights during Phase I and a 5% increase on your single attempts in Phase II.

While this type of programming will work well enough for most intermediates, I’d prefer to see a much more sophisticated programmatic set-up. Ideally, you’ll have variation in intensity and volume not only from week to week, but from workout to workout.

At the intermediate levels and beyond, doing the same thing every time you hit the gym quickly produces diminishing marginal returns. And, for the novice, this program isn’t appropriate at all because the rate of progression is just far too slow. Novices can PR every workout – not just once every eight weeks.

Korte’s 3×3 features no assistance work whatsoever. That’s right; zero assistance. The program is the ultimate in specificity. All you do is the competition lifts.

However, in my opinion, going this far to the extreme of specificity is actually a disadvantage. When you subject your body to the same stimulus over and over again, you get a diminished response to that stimulus. At some point, the response to the same stimulus is so far diminished that you’re just better off including a less specific variation such as close-grip bench, pause squats, or deficit deadlifts. Always be skeptical of programs which are ultra-specific or that feature a different variation every single workout.

Further still, in terms of specificity, this program was not designed for raw lifters. A lot of people are going to get upset by me saying this, but I don’t think you should simply run this program as is if you’re a raw lifter. Full single ply competition gear often adds anywhere from 10-25% to someone’s raw squat.

The programming in Phase I is based off of your geared competition max. For geared lifters, ~60% of their geared max is probably more like 75-80% of their raw max. All of the sudden those percentages seem a lot more realistic and specific to powerlifting.

For raw lifters, I think it is nonsensical to spend an entire month of training doing nothing but lifting weights in the 60% range. I am not saying that you cannot get stronger working at 60%, but I am saying that working at 60% using the energy saving method is not specific enough to powerlifting to produce optimal gains. You need to lift heavy to lift heavy. For raw guys, this cycle would really need to be modified and it isn’t clear how well simple modifications would work because they haven’t been extensively tested like the original Korte 3×3 has.

This program actually has fairly poor fatigue management in my opinion. There is almost no manipulation of intensity and volume throughout the program. Sure, you have variation from phase to phase, which is what matters most in the grand scheme of things, but during those first four weeks, where you perform the same workout twelve times in a row, all you’re doing is accumulating fatigue. There is not a single point at which fatigue is dissipating besides perhaps over the weekend.

From practical experience, we know that the body seems to respond best to variations in volume and intensity. When fatigue is waved up and down throughout both the microcycles and mesocycles you get better results than when you only wave fatigue from period to period.

Additionally, even though there is no assistance on this program whatsoever, it is my personal opinion that some people can’t recover from deadlifting three times per week even at 60%. This is not because it is impossible to recover from this much work, but if you’re used to doing 2-3 deadlift work sets per week, you’re simply asking a whole lot from your body to then transition into 15-24 deadlift work sets per week. It is just too much to ask. If you’re already fairly well adapted to higher volumes, this isn’t as big of a concern.

Korte’s 3×3 features a small amount of autoregulation. In Phase I, you are given a small set range which allows you to determine volume based on feel to some degree. Set and rep ranges are always better than nothing.

However, for the most part, everyone does the exact same thing on Korte’s 3×3. There is no assistance or personalized exercise selection whatsoever. There is almost no volume autoregulation at all in Phase II. There is zero intensity autoregulation throughout the whole program.

As we’ve said over and over again, the law of individual differences states that everyone responds slightly differently to the same stimuli. An older guy cannot, and should not, be subjected to the same volumes as a younger guy if you want optimal responses. Further still, even the same person is going to have good days and bad days. If the programming doesn’t let you go heavier and harder on good days, and lighter and easier on bad days, you have a recipe for sub-optimal results. You must take into account the fact that people are different and that performance fluctuates from day to day.

That said, I think the program is riddled with problems for the raw lifter and I simply cannot recommend it. You’re getting almost no autoregulation, the program is too specific, the %s are too light for the raw lifter who isn’t basing the program off a geared max, and the fatigue management structure is far too simplistic for highly advanced lifters. If you’re looking for a cookie cutter, high frequency, high volume approach, I’d consider running one of the many free Sheiko templates instead. Better still, hire a guy like Sheiko to personalize your program. You could always contact us at PowerliftingToWin for a customized, high frequency, high volume routine as well.

Next up, we’re going to take a look at Mike Tuchscherer’s Generalized Intermediate Program. In my opinion, Reactive Training Systems is the single best programming system on the market today. This is going to be one of our most instructive reviews yet. Stay tuned!